Items related to What Are Intellectuals Good For?

Scialabba, George What Are Intellectuals Good For?

What Are Intellectuals Good For? 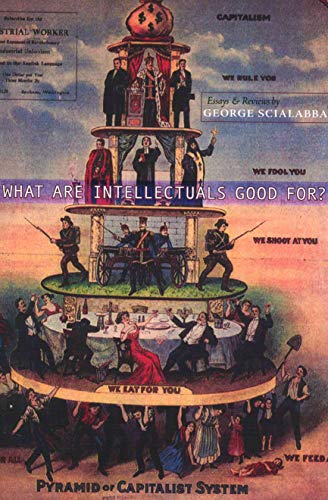 Nonfiction. Politics. Literary Criticism. WHAT ARE INTELLECTUALS GOOD FOR? appraises a large gallery of twentieth-century intellectuals, including Randolph Bourne, Dwight Macdonald, Lionel Trilling, Irving Howe, Isaiah Berlin, William F. Buckley Jr., Allan Bloom, Richard Rorty, Stanley Fish, Christopher Lasch, Edward Said, Ellen Willis, and Christopher Hitchens. It also includes two essays on intellectuals and politics and concludes with one on moral consequences of our species cyber-evolution. George Scialabba, a columnist for the Boston Globe and contributor to the Boston Review, Dissent, the American Prospect, and the Nation, is admired by a circle of discerning readers. WHAT ARE INTELLECTUALS GOOD FOR?, his second essay collection, brings his voice to a larger audience. Scott McLemee, the Intellectual Affairs columnist of InsideHigherEd, has contributed a foreword.

George Scialabba was born (1948) and raised in East Boston, MA, and attended Harvard (AB, 1969) and Columbia (MA, 1972). He has been a social worker (Mass. Dept. of Public Welfare, 1974-80), a clerical worker (Harvard University, 1980 to the present), a faculty member of the Bennington Graduate Writing Seminars (2007-8), and a freelance book critic. His column, "New Thinking," appears bimonthly in the Boston Globe book section. In 1991 he was awarded the Nona Balakian Citation for Excellence in Reviewing of the National Book Critics Circle. His first collection, Divided Mind, was published in 2006 by Arrowsmith Press.

George Scialabba has, over the years, delivered perhaps the most reliably acute cultural commentary to be found anywhere on the ethical left. He brings the review-essay to a state of high development, incorporating elements of memoir and skillfully deploying the wide range of literary and historical reference he commands. As this sample shows, he writes with wit and economy, and his work gives pleasure as it enlightens. --Norman Rush

Koestler's Rubashov lay in jail under the familiar and fatal constraint to put himself in the position of his opponent, and to see the scene through the other's eyes. George Scialabba shows, with his combined eloquence and modesty, that this critical intellectual faculty can transcend the prisoner's dilemma. --Christopher Hitchens

Scialabba writes with marvelous fluency and conversational ease and is a gifted expositor of the ideas of friend and foe alike ... Reading straight though this volume leaves one with an appreciation for Scialabba's many gifts particularly his rare combination of intellectual depth and reach with readability. He inhabits his role comfortably, without histrionics or nostalgia and with an untroubled resignation toward the contemporary intellectual's diminished standing in a cultural world now dominated by specialized knowledge and professional guilds. He manages, nonetheless, to provide a personal guide through the controversies of the age. --Wesley Yang, Bookforum

1. What Are Intellectuals Good For? -- (with a Foreword by Scott McLemee)

2. What Are Intellectuals Good For? [Paperback] Scialabba, George

3. What Are Intellectuals Good For?

4. What Are Intellectuals Good For?

5. What Are Intellectuals Good For?