Items related to Merv Griffin: A Life in the Closet

Porter, Darwin Merv Griffin: A Life in the Closet 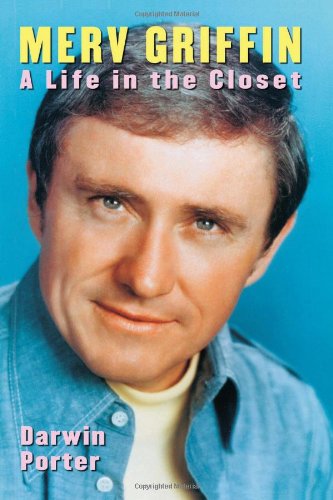 This is the first post-mortem, unauthorized insight into Merv Griffin, a failed singer and unsuccessful actor who unexpectedly rewrote the rules of America's broadcasting industry. He became the richest man in TV, befriended everyone in media who mattered, bought a casino, and maintained a secret life as America's most famously closeted homosexual. From a controversial writer whose previous work has virtually re-defined the art of the celebrity biography, HERE'S MERV.

Bland, jolly, and innocuous, Merv Griffin was a diplomatic schmoozer whose broadcasted image appeared as a regular guest in our living rooms, kitchens, and bedrooms, oozing affability and setting a standard for the way we wanted to be. Even during Vietnam, the Sexual Revolution, and the impeachment of Richard Nixon, Merv rarely, if ever, veered from the network's concept of daytime TV as detached escapist fun for the whole family.

At least some of those presuppositions have been shredded thanks to the release of Darwin Porter's newest overview of the famously famous and spectacularly wealthy.

Porter provides a rich feast of guilty pleasures: Show-biz history, in the words of an earlier reviewer, that's "writ large, smart, and with great style."

It addresses more than "Merely Merv," a subject which in the hands of a lesser writer could have been as dull and prosaic as some of Merv's telecasts. Merv is merely the departure point for an overview of show-biz in the '50s, the raw ambition, the hush-a-by scandals, and the behind-the-scenes maneuvering that, 'till now, were either too controversial or too libelous to actually make it into print.

The author first met his subject in 1959 when Darwin (then the 21-year-old head of the Student Press at the University of Miami) hired Merv (then a 34-year-old boy singer with a Big Band) to provide the entertainment for his graduating class's senior prom for a fee of $500.

Based on the friendship that evolved from that event, Porter began the relentless compilation of data which made its way into this book.

And what a book it is. No one ever defined Merv as celibate, but even by the standards of TV Land, Merv was more promiscuous and more eccentric than anyone outside the entertainment industry could have imagined at the time. En route, he virtually rewrote the rules of television broadcasting, invented the game show as we know it today, racheted up the razzmatazz quotient of casinos around the world, and befriended everyone who mattered in politics and entertainment.

Born in San Mateo, California in 1925 to bankrupted Irish-American parents, he died a self-made billionaire in 2007 surrounded by friends, family and a public legacy that was one of the most immediately recognizable in America.

As startling as these revelations are (how the studios managed to pull the wool over our eyes back then!), the news, as revealed in Porter's biography, isn't the rather pedestrian fact that Merv liked guys. Described in well-documented detail are young Merv's involvements with an archbishop, scores of A-list actors and actresses, various captains of industry, and politicians who included Eisenhower, JFK, Nixon, The Fords, and the Reagans.

Porter handles Merv's penchant for successful schmoozing, both in and out of the boudoir, with tact, respect, and a gift for delivering punchy, well-researched anecdotes about show-biz.

Author and social critic Larry Post described Merv's predicament like this: "The real irony [of the Herculean efforts Merv took to conceal his gender preference] involves the enduring power of the Hollywood closet that held even a billionaire locked in its embrace, paying homage to the presumed prejudices of the public."

Although the behavior laid out within Porter's texts might be raunchier and more lurid than what we might have expected from congenial Uncle Merv, it's undoubtedly the kind of book which, after everybody in Hollywood reads it, blogs it, dissects it, and in some cases, becomes apoplectic over it, will be defined as an indispensible guide to the evolution of a uniquely American art form: Merv Griffin.

An Irish-American from California, Merv Griffin (1925-2007) evolved into TVs most powerful and richest mogul, earning 17 Emmy Awards for his Merv Griffin Show, a durable daytime staple which attracted 20 million viewers daily. He developed a reputation for interviewing "everybody who mattered" in contemporary American life, breaking social barriers and airing interviews with everyone from Martin Luther King, Jr (his first major TV appearance) to Joan Crawford (one of her last). He also brought on drag queens, revolutionaries, gay activists, and "fringe elements" of the society in ways which at the time were considered radical. Referring to whom he had interviewed during his long career, Merv, with his trademark merriness said, "The only person who ever eluded me was The Pope."

Behind the scenes, Merv became quietly known for his Midas touch, developing two of Hollywood's most popular game shows, Jeopardy! and Wheel of Fortune. In one now-legendary 15-minutes, he wrote "Think," a melody which played while the contestants were puzzling the questions. He earned $85 million in royalties from that song alone, plus countless additional millions for other television innovations.

A boy singer with Freddy Martin's band in the 40s, Merv failed at a movie career in Hollywood during the 50s, and bombed in the development of many other TV shows until he got it right. When he did, he justifiably earned a reputation as one of the most loved, most reliable, and most consistent of TV personalities. Flush with millions, Merv later became a major player in the resort and gambling business, locking horns with, among others, Donald Trump.

Behind the scenes, a radically different man emerged. He married only once in his life, producing a son, but with the notable exception of sexual encounters with Judy Garland and Marilyn Monroe, he had almost no affairs with women. His romantic interests lay elsewhere, as he learned one night as a teenager when he seduced his uncle's best friend and Merv's swashbuckling screen hero, Errol Flynn. From that lofty introduction to the world of intra-male sex, a young, thin, and handsome Merv went on to involvements with heartthrobs Guy Madison, Montgomery Clift, Rock Hudson, Marlon Brando, and Roddy McDowall.

Despite, or perhaps because of, Merv's secret life, Merv regularly hung out with the very rich and the very famous. He knew them all: Mae West, Bette Davis, Tallulah Bankhead, John and Jackie Kennedy, Ronald and Nancy Reagan, Arnold Schwarzenegger, Rita Hayworth, Marlene Dietrich, Greta Garbo, Bob Hope, Dwight Eisenhower, Truman Capote, Gary Cooper, and Richard Nixon. And with the notable exception of Ike, who didn't gossip, he swapped stories, advice, and gossip with each of them. Merv "dated" Elizabeth Taylor and became the best friend of Nancy Reagan. "He was my rock during Ronnie's last years," Nancy told the press after Merv's death (from prostate cancer) in August of 2007. "I can't stand the thought of losing him." Insights into Merv's encounters with these personalities, both onscreen and off, are scattered throughout this biography, which took decades to compile.

Merv Griffin, A Life in the Closet goes backstage, behind the curtains, to explore the private life of this fascinating personality who was adored by millions of fans. Most of them knew nothing about the private life of the man who became one of the most electrifying personalities on TV, largely because of his laid-back sincerity and in some cases, "Aw, shucks" folksiness.

And whereas he grew adept at getting the world's most famous people to spill their secrets on TV, he managed to keep the door of his own closet of secrets tightly locked. Until now!

Merv Griffin: A Life in the Closet Hardcover

Merv Griffin: A Life in the Closet (Hardback)

Book Description Hardback. Condition: New. Language: English. Brand new Book. Merv Griffin began his career as a big band singer, moved onto a career as a romantic movie hero and eventually rewrote the rules of the entertainment industry. He interviewed everyone, from Martin Luther King Jr to Joan Crawford and brought drag queens, revolutionaries and gay activists into the mainstream. He also created the hit gameshows Jeopardy and Wheel of Fortune. Porter's biography - the first to be published since Griffin's death in 2007 - exposes the details behind one of the richest and most notorious media moguls in entertainment history. Seller Inventory # ANB9780978646509