Items related to Bates on Bush 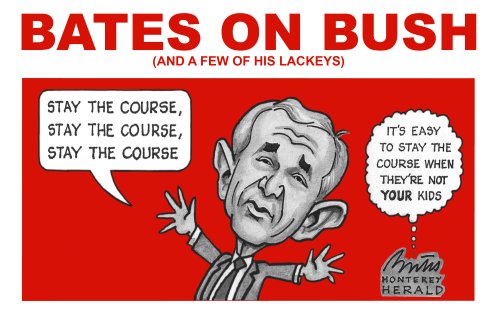 Bush, Cheney, Rumsfeld, Scooter Libby, John Bolton, Alberto Gonzales, Karl Rove, Tom Foley, Joe Lieberman, Wolfowitz---the thundering herd of these and other strange characters that rampaged America during the Bush years are captured in this classic collection of political cartoons by a master artist of rare biting wit. After years of producing celebrity portraits, museum sketches of travels to 133 countries around the world, and cartoons for the local paper poking gentle fun at the foibles of its natives, Pulitzer nominee Bill Bates had become a cherished icon in California's Carmel-by-the-Sea. Then came the election of George W.Bush and the mad-as-hell and I'm not going to take it any more moment for this American successor to the great French artist and political cartoonist Honore Daumier. Bates commentary on what inspired each cartoon makes BATES ON BUSH a dual tour de force. On one hand, a roaring and liberating collection of laughs with a tug at the heart in its glimpse into the backdrop insanity of the Iraq war. On the other hand, a visual chunk of American history likely to long endure.