Items related to The Deniers 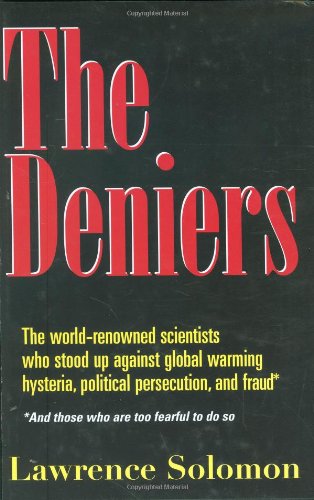 The world-renowned scientists who stood up against global warming hysteria, political persecution, and fraud*
*And those who are too fearful to do so

Al Gore says any scientist who disagrees with him on Global Warming is a kook, or a crook.

Guess he never met these guys

Dr. Edward Wegman--former chairman of the Committee on Applied and Theoretical Statistics of the National Academy of Sciences--demolishes the famous "hockey stick" graph that launched the global warming panic.

Dr. David Bromwich--president of the International Commission on Polar Meteorology--says "it's hard to see a global warming signal from the mainland of Antarctica right now."

Prof. Paul Reiter--Chief of Insects and Infectious Diseases at the famed Pasteur Institute--says "no major scientist with any long record in this field" accepts Al Gore's claim that global warming spreads mosquito-borne diseases.

Dr. Christopher Landsea--past chairman of the American Meteorological Society's Committee on Tropical Meteorology and Tropical Cyclones--says "there are no known scientific studies that show a conclusive physical link between global warming and observed hurricane frequency and intensity."

Dr. Zbigniew Jaworowski--world-renowned expert on the ancient ice cores used in climate research--says the U.N. "based its global-warming hypothesis on arbitrary assumptions and these assumptions, it is now clear, are false."

Prof. Tom V. Segalstad--head of the Geological Museum, University of Oslo--says "most leading geologists" know the U.N.'s views "of Earth processes are implausible."

Dr. Syun-Ichi Akasofu--founding director of the International Arctic Research Center, twice named one of the "1,000 Most Cited Scientists," says much "Arctic warming during the last half of the last century is due to natural change."

Dr. Claude Allegre--member, U.S. National Academy of Sciences and French Academy of Science, he was among the first to sound the alarm on the dangers of global warming. His view now: "The cause of this climate change is unknown."

Dr. Richard Lindzen--Professor of Meteorology at M.I.T., member, the National Research Council Board on Atmospheric Sciences and Climate, says global warming alarmists "are trumpeting catastrophes that couldn't happen even if the models were right."

Dr. Habibullo Abdussamatov--head of the space research laboratory of the Russian Academy of Science's Pulkovo Observatory and of the International Space Station's Astrometria project says "the common view that man's industrial activity is a deciding factor in global warming has emerged from a misinterpretation of cause and effect relations."

Dr. Richard Tol--Principal researcher at the Institute for Environmental Studies at Vrije Universiteit, and Adjunct Professor at the Center for Integrated Study of the Human Dimensions of Global Change, at Carnegie Mellon University, calls the most influential global warming report of all time "preposterous . . . alarmist and incompetent."

Dr. Sami Solanki--director and scientific member at the Max Planck Institute for Solar System Research in Germany, who argues that changes in the Sun's state, not human activity, may be the principal cause of global warming: "The sun has been at its strongest over the past 60 years and may now be affecting global temperatures."

Prof. Freeman Dyson--one of the world's most eminent physicists says the models used to justify global warming alarmism are "full of fudge factors" and "do not begin to describe the real world."

Dr. Eigils Friis-Christensen--director of the Danish National Space Centre, vice-president of the International Association of Geomagnetism and Aeronomy, who argues that changes in the Sun's behavior could account for most of the warming attributed by the UN to man-made CO2.

And many more, all in Lawrence Solomon's devastating new book, The Deniers

The Deniers: The World Renowned Scientists Who Stood Up Against Global Warming Hysteria, Political Persecution, and Fraud**And those who are too fearful to do so