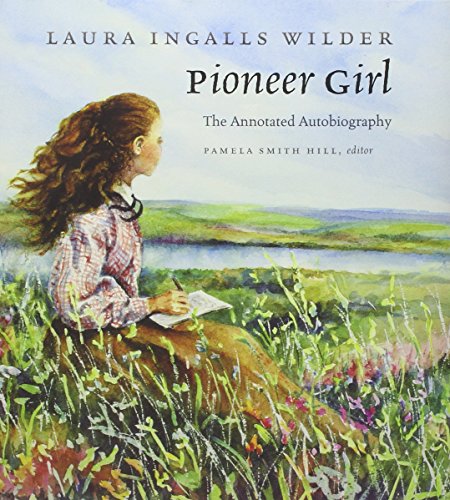 Follow the real Laura Ingalls and her family as they make their way west and discover that truth is as remarkable as fiction.

Hidden away since the 1930s, Laura Ingalls Wilder s never-before-published autobiography reveals the true stories of her pioneering life. Some of her experiences will be familiar; some will be a surprise. Pioneer Girl re-introduces readers to the woman who defined the pioneer experience for millions of people around the world.

Through her recollections, Wilder details the Ingalls family s journey from Kansas, Missouri, Wisconsin, Minnesota, Iowa, back to Minnesota, and on to Dakota Territory sixteen years of travels, unforgettable stories, and the everyday people who became immortal through her fiction. Using additional manuscripts, diaries, and letters, Pioneer Girl: The Annotated Autobiography builds on Wilder s work by adding valuable context and explores her growth as a writer.

Author of an award-winning Laura Ingalls Wilder biography, editor Pamela Smith Hill offers new insights into Wilder s life and times. In an introduction, Hill illuminates Wilder s writing career and the dynamic relationship between the budding novelist and her daughter and editor, Rose Wilder Lane. Sharing the story of Wilder s original manuscript, Hill discusses the catalysts for Pioneer Girl and the process through which Wilder s story turned from an unpublished memoir into the national phenomenon of the Little House series.

Pioneer Girl: The Annotated Autobiography also explores the history of the frontier that the Ingalls family traversed and the culture and life of the communities Wilder lived in. This groundbreaking volume develops a fuller picture of Wilder s life and times for the millions of readers who wish to learn more about this important American author. It contains one hundred and twenty-five images, eight fully researched maps, and hundreds of annotations based on numerous primary sources, including census data, county, state, and federal records, and newspapers of the period.

An important historic and literary achievement, this annotated edition of Pioneer Girl provides modern readers with new insights into the woman behind the fictional classics Little House in the Big Woods, Farmer Boy, Little House on the Prairie, On the Banks of Plum Creek, By the Shores of Silver Lake, The Long Winter, Little Town on the Prairie, These Happy Golden Years, and The First Four Years.

Follow the real Laura Ingalls and her family as they make their way west and discover that truth is as remarkable as fiction.

Hidden away since 1930, Laura Ingalls Wilder's original autobiography reveals the true stories of her pioneering life and shows how Wilder, as an author of growing skill, transformed her girlhood into one of the greatest children's series of all time, the Little House books. Some of her experiences will be familiar; some will be a surprise. This September, for the first time ever, Wilder's fans around the world will be able to read them all.

Pioneer Girl follows the Ingalls family's journey through Kansas, Missouri, Wisconsin, Minnesota, Iowa, back to Minnesota, and on to Dakota Territory sixteen years of travels, unforgettable experiences, and the everyday people who became immortal through Wilder's fiction. Using additional manuscripts, letters, photographs, newspapers, and other sources, award-winning Wilder biographer Pamela Smith Hill adds valuable context and leads readers through Wilder's growth as a writer. Do you think you know Laura? Pioneer Girl: The Annotated Autobiography will re-introduce you to the woman who defined the pioneer experience for millions.

Laura Ingalls Wilder (1867 1957) finished her autobiography, Pioneer Girl, in 1930 when she was sixty-three years old. Throughout the 1930s and into the early 1940s, Wilder utilized her original manuscript to write a successful series of books for young readers. Her daughter, journalist Rose Wilder Lane, served as her editor and borrowed from her mother s life story to write two novels of her own. Pioneer Girl, which chronicles sixteen years of Wilder s pioneer youth, is where all the stories begin. Wilder died in Mansfield, Missouri, at ninety years of age on February 10, 1957.

Pamela Smith Hill is the award-winning author of Laura Ingalls Wilder: A Writer s Life and three historical novels for young adults Ghost Horses, The Last Grail Keeper, and Voice from the Border. She has taught creative and professional writing at universities in Oregon, Washington, and Colorado, as well as a course on Laura Ingalls Wilder through Missouri State University. She grew up forty miles from Rocky Ridge Farm, launched her writing career not far from De Smet, and now lives and works in Portland, Oregon.

Pioneer Girl: The Annotated Autobiography is a publication of the Pioneer Girl Project, which is a research and publishing program of the South Dakota State Historical Society.