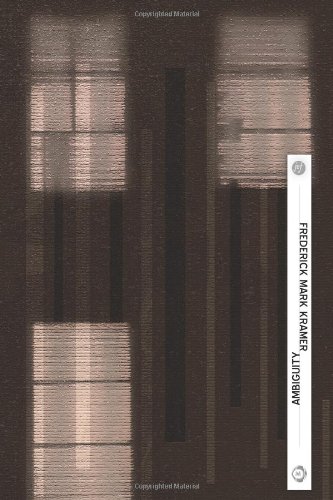 "Get it up!" demands the narrator of Frederick Mark Kramer's new novel, Ambiguity, of himself as he lies down to rest, as if his sexual energy could save him. However, for Kramer's narrator, Darko, sexual energy alone, although it abounds in Darko's memory, cannot save him. This is a novel about breath, or, as Darko calls it, "the pneuma." Darko says that "the pneuma can mean the breath of life or the destruction of life," and in between is where this novel takes place. Clearly Darko uses his entire life as his inspiration here, "inspiration" meaning "breathing in." Then Darko recounts this life in ten paragraphs that are gymnastic and acrobatic and celebrate corporeal existence. This is the "perspiration," or the "breathing through" life that Darko has exercised. His ten paragraphs, though, are ten breaths, ten exhalations, leading to a final "breathing out," or "expiration," as he takes to his bed, exhausted, demanding of himself a new beginning, not just the release of orgasm, but the orgasmic seeding of new life, a creative re-fertilization of the world and the rebirth of oneself. As always, Kramer is both resolutely readable and profoundly resonant in his work. Those familiar with his masterful novel Apostrophe/Parenthesis will find in Ambiguity that Kramer has produced another masterpiece that rivals the best works of anyone.---Eckhard Gerdes

Frederick Mark Kramer is a novelist, playwright and amateur violinist living on the Upper West Side of Manhattan.

Book Description Civil Coping Mechanisms, 2010. Condition: Good. Shows some signs of wear, and may have some markings on the inside. Seller Inventory # 17918917-6

Book Description Civil Coping Mechanisms, 2010. Paperback. Condition: Good. Connecting readers with great books since 1972. Used books may not include companion materials, some shelf wear, may contain highlighting/notes, may not include cdrom or access codes. Customer service is our top priority!. Seller Inventory # S_241118905