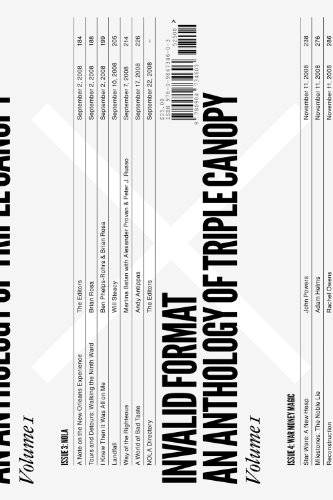 Invalid Format is an archive of the widespread publishing activities of Triple Canopy, the editorial collective and online magazine based in New York, Los Angeles and Berlin. The book, designed in collaboration with Project Projects, translates into print work that originally appeared in other forms. This inaugural volume of Invalid Format includes artist projects and literary work published in the first year of Triple Canopy’s existence, documentation of public programs, and a sampling of foundational correspondence. In form and content, the book explores how works produced for the screen might be transposed to the codex in a way that recalls that former context while also fully inhabiting the page. Contributors include Lene Berg, Keren Cytter, Rivka Galchen, Sheila Heti, Adam Helms, Craig Kalpakjian, Jon Kessler, Wayne Koestenbaum, Rachel Mason, Amir Mogharabi, Ed Park & Rachel Aviv, Emily Richardson & Iain Sinclair, Michael Robinson and Diane Williams.

"Invalid Format" is among the most artful new attempts to reinvent the Web by the codex, and the codex by the Web. (Joshua Cohen The New York Times Book Review)