Items related to Brew-Ku: Where Coffee Intersects with Life

Brew-Ku: Where Coffee Intersects with Life 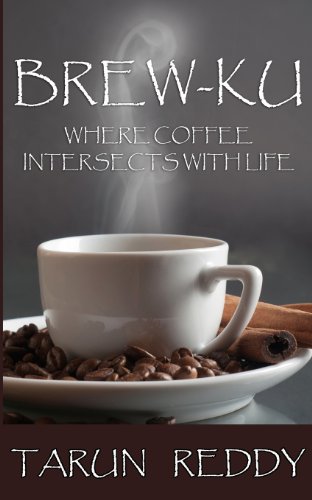 Coffee is the second most widely traded commodity in the world and haiku is one of the most distinctive literary forms in the world. Combine these two realities and you get an eclectic book from Tarun Reddy that features 200 haikus, Japanese translations, and an equal number of fun facts to create an enjoyable look at a beverage many of us take for granted.

Tarun Reddy, a writer, and sometimes a really good writer, since 1993. He earned a bachelor’s degree in communications from Duquesne University and a master’s degree in corporate communications and public relations from Georgetown University in 2009. In college, Tarun completed internships at Shearson Lehman and the Pittsburgh Business Times. Tarun’s first job was working as a general assignment reporter for the Galion Inquirer in Galion, Ohio. From there, he moved on to the Northwest Arkansas Times, where he was the business editor in 1994 and 1995. After moving to the Washington, D.C. area in 1996, Tarun worked for a variety of newsletters, including McGraw Hill’s Inside Energy with Federal Lands covering science, technology, and Congress. He resides in Vienna, Virginia and is active in the community, serving as an information desk volunteer at the Smithsonian. Tarun also serves as a math tutor for students in Fairfax County, Virginia. He has a son named Akhil. Tarun also writes the blog, “Educate Me, Maybe,” (http://educatememaybe.blogspot.com) as a way to stay mentally sharp and to amuse friends by sharing information which, is sometimes useless. You may reach Tarun at tarunreddy@verizon.net.

1. Brew-Ku : Where Coffee Intersects with Life

Book Description dMon Publishing, LLC. Paperback. Condition: Very Good. A copy that has been read, but remains in excellent condition. Pages are intact and are not marred by notes or highlighting, but may contain a neat previous owner name. The spine remains undamaged. At ThriftBooks, our motto is: Read More, Spend Less. Seller Inventory # G0985018070I4N00

2. Brew-Ku: Where Coffee Intersects with Life

Book Description dMon Publishing, LLC, 2012. Condition: Good. A+ Customer service! Satisfaction Guaranteed! Book is in Used-Good condition. Pages and cover are clean and intact. Used items may not include supplementary materials such as CDs or access codes. May show signs of minor shelf wear and contain limited notes and highlighting. Seller Inventory # 0985018070-2-4

3. Brew-Ku: Where Coffee Intersects with Life