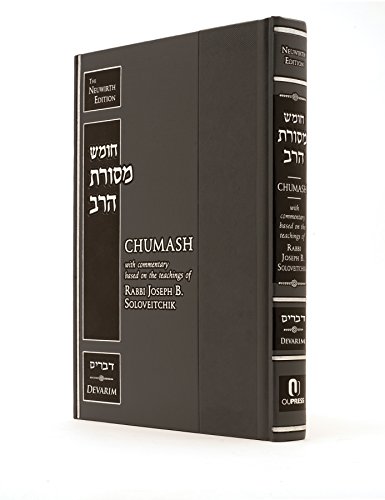 Rabbi Joseph B. Soloveitchik (the Rav) was the towering rabbinic thinker of the twentieth century. In addition to his wellspring of Torah knowledge, the Rav taught, wrote and lectured extensively on Chumash. The Rav, however, never wrote a systematic commentary on Chumash, and, until now, the only way to study his interpretation and analysis of Chumash was to search for pertinent material by wading through the Rav's published writings and hard-to-find audio tapes of his lectures and shiurim. Now, for the first time, the Rav's teachings on Chumash have been collected into a published commentary on Sefer Devarim (The Book of Deuteronomy). Commentary by the Rav on the weekly Haftarah is included.

In the fifth and final volume of Chumash Mesoras HaRav, Dr. Arnold Lustiger has once again performed the feat of assembling the multifarious teachings of the Rav, Rabbi Joseph B. Soloveitchik, into a seamless commentary alongside the Chumash text. As always, the Rav s commentary illuminates the text with both his halachic insight and philosophical acumen. Sefer Devarim comprises Moshe Rabbeinu s farewell address to the Jewish people. The Rav captures the poignancy of Moshe's parting words upon his failure to achieve entry into the Promised Land: When he was told that he would not enter Eretz Yisrael, Moses pleaded for forgiveness. Had the people joined him in prayer, the Holy One would have been forced to respond. But they did not join. Thus, we read that with tears in his eyes Moses tells them, Va'eschanan, I prayed alone . . . I was a lonely, solitary prayerful person; I prayed, no one else joined in with me. But God became angry and did not listen to me lema'anchem, because of you. Moses did not enter Eretz Yisrael because instead of addressing the rock, he hit it. It was not the fault of Am Yisrael that Moses made a mistake. But had the people possessed the sensitivity and love for Moses similar to that love that Moses felt for them, they would have torn the decree into shreds. It was their fault. But the tragic death of Moshe also marks the beginning of a new era for the Torah and the Jewish people. Throughout the course of the commentary, the Rav returns to the unique quality of Sefer Devarim to explain a number of features of this final book of the Chumash. Following in the path of the Vilna Gaon as well as many Chassidic masters, the Rav sees Sefer Devarim as an intermediary between the Written Torah (Torah Shebichtav) and the Oral Law (Torah Sheb'al Peh). With Moshe's demise we lost an unmediated connection to God, but gained an alternative route to Divine instruction through the Torah Sheb al Peh. The Chumash Mesoras HaRav on Sefer Devarim, as well as the now completed series as a whole, brings readers the teachings of an undisputed master of Torah Shebichtav and Torah Sheb'al Peh. This work is sure to endure for generations as a classic companion to the Chumash. --Jewish Action, Summer 2018