Items related to Hock - The Real Me

Hock, Gareth Hock - The Real Me

Hock - The Real Me 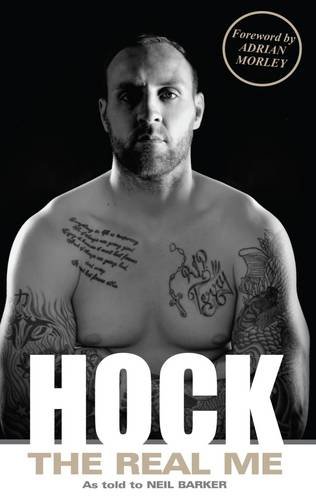 "My temper and hot-headedness has always let me down. Like most people, I have done a lot of things that I regret..." - Gareth Hock Gareth Hock is the bad boy of rugby league. A player who in his early years with hometown Wigan seemed to have the world at his feet was instead derailed by a drugs ban, skirmishes with officials and other headline-grabbing controversies.It has been said that Hock had the potential to be one of the best players in the world.He had everything and more in his locker and should have been up there brushing shoulders with the game's all-time greats.Some of the biggest personalities in Wigan club history watched and were appreciative of the emergence of a lion-hearted local hero who combined God-given sublime skill with raw-boned aggression.Add to that a powerhouse determination and burning desire to emulate his hero Andy Farrell and it was so nearly the perfect combination. Yet it never quite turned out that way.Throughout a rollercoaster career, Hock has very often self-destructed and been easily led. There have been times when he has been his own worst enemy.He has let himself down, on and off the field.Yet he has also been a handful for everyone from the local police to the star-studded Australian national team. And he is still a hard man on a mission, man enough to admit to his failings and seek to put them right.Hock's is a remarkable rags to riches story - a tale of a complex character dogged by the pitfalls and perils that line life's highway.It is also glowing testimony to the character and staying power of the man at its heart.Gareth Hock has had to climb from the canvas on many occasions. He has survived a few standing counts but is still doing what he does best and that's playing rugby league.But here, for the very first time, is evidence that there is more to this private family man than that.Hock: The Real Me is a book that packs a real punch!

Capped four times by Great Britain and five by England, including the 2008 World Cup, Gareth Hock seemingly had it all. A star with hometown Wigan, he made almost 200 appearances for the Warriors before moving on to Widnes, Salford and Leigh. So often, though, his volatile temperament seemed to get the better of him, in all being suspended for 103 games and notoriously missing two seasons after testing positive for cocaine. Fiesty and flamboyant on the field in equal measure he has become one of the most iconic players in rugby league - not always for the right reasons