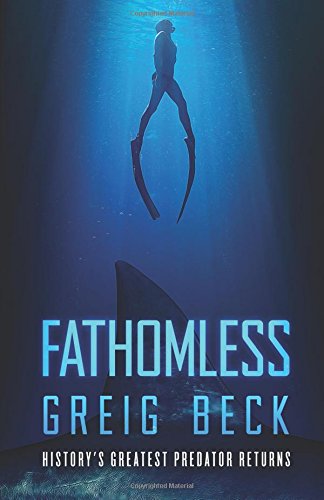 Carcharodon Megalodon – the largest and most fearsome predator to have ever existed on our planet. Rumors of its existence in our modern oceans have persisted for centuries. Now, in a new adventure, the rumors explode into brutal and terrifying reality.

Baranof Island, Gulf of Alaska, 1952
Jim Granger is searching for a place of legend. Known as ‘Bad Water’ by the island’s elders, it’s reputed to be home to many dangerous creatures. Through a seam in a cliff face, Jim finds what he seeks. He also finds, too late, that the water demon he was warned about is horrifyingly real.

Today, Cate Granger is following in her grandfather’s footsteps. Along with a team of scientists and crew, she accidentally releases a creature from Earth’s primordial past into today’s oceans. The giant Megalodon shark follows its instinct and a genetic memory of a home that once existed millions of years ago along the Californian coast. Nothing is safe on or below the water as the monster stakes its claim on the world’s oceans.
Now Cate and her team must do battle with a creature that has no rival, knows no fear, and regards humans as nothing more than prey.

Greig Beck is the author of the Alex Hunter series and The First Bird series.  He lives in Sydney, Australia.

“Combines the terror of Benchley's Jaws with the primordial horror of Alten's MEG in an adventure that is the best of both.”  —Matthew Summers, blogger, Smash Dragons

“Fathomless has all the markings of a thoroughbred. Borrowing from Michael Crichton, Clive Cussler and, in this particular book, the JAWS man himself Peter Benchley – Fathomless is an engaging and intelligent novel that promises thrills and adventure and delivers.” —The Novel Pursuit

“Greig Beck does it again with another off the charts monster thriller.” —Lee Murray, author, Into the Mist

“An enjoyable, albeit terrifying, thriller recommended for everyone.” —Passionate About Books

Book Description Cohesion Press, 2016. Condition: Good. A+ Customer service! Satisfaction Guaranteed! Book is in Used-Good condition. Pages and cover are clean and intact. Used items may not include supplementary materials such as CDs or access codes. May show signs of minor shelf wear and contain limited notes and highlighting. Seller Inventory # 0994630409-2-4