Items related to Shot to Pieces: a novel (A Paddy Durr Novel)

Shot to Pieces: a novel (A Paddy Durr Novel) 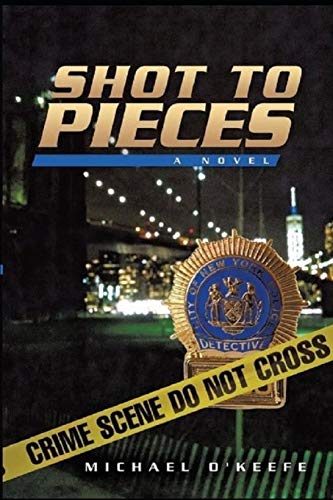 Paddy Durr is a brilliant detective and his own worst enemy. A brutal upbringing filled with abuse, neglect, and abandonment has left him with an ingrained sense of worthlessness. When he catches a grisly gang-related street assassination in Brooklyn, he is on the verge of an emotional and psychological breakdown. His wife is divorcing him. His children won't speak to him. His murder case is a political nightmare. The mayor and the police department would rather it just go away. Paddy finds himself on his own. With the clock ticking, Paddy must hold it together long enough to solve the case, fix himself enough to rescue his family life, or implode, irrevocably destroying his career, his family, and himself.

Michael O'Keefe is a retired 1st GradeDetective from the NYPD.  He worked inthe toughest neighborhoods in New York for twenty-four-years, investigatingHomicides and other violent crime.  Bornand raised on the mean streets described in his fiction, his characters andsettings are drawn from the people he encountered there--on both sides of thelaw.  Shotto Pieces is his first novel, first published July of 2016. The book wasadopted into the curriculum by the John Jay College of Criminal Justice andSaint John's University's Criminal Justice Department.  Shot toPieces is now recommended reading for all criminal justice majors at bothcolleges.  He is presently nearcompletion on two follow-up novels, and a collection of short fiction entitled,13 Stories-Fractured, Twisted, & PutAway Wet, due to be published in May of 2019.  Michael lives on Long Island with his family,where he writes a little, and practices the ancient martial arts of lawn andswimming pool maintenance--when he is not coaching football.

A Brooklyn detective works a vicious homicide while striving to bring his ruptured family together in this debut police procedural.
The latest case for Padraig "Paddy" Joseph Durr, senior first-grade detective at the 83rd Precinct, seems fairly open-and-shut. Two men were with the victim when he was shot by an unknown assailant, who managed to escape but dropped his gun. The witnesses, however, aren't reliable--one's a convicted car thief--and the victim isn't so easy to identify, with a handful of IDs listing varying names on his person. Paddy's personal life is no less complicated, starting with his estranged wife, Mairead, serving him divorce papers. His infidelity as well as his often strenuous job played a part in the couple's strained relationship and, by extension, in their children either ignoring or outright despising their father. Flashbacks detail Paddy's arduous road in his nearly 30 years as a cop. The product of abusive parents, Paddy is the only one of four children who makes it out of the home alive, losing his brothers to gunfire and heroin overdoses. As a cop, he suffers from PTSD following job-related shootings, one that leads to the possibility of a murder indictment. If Paddy can overcome such ordeals, professional and domestic, he'll hopefully be able to track down the shooter. Though the present-day mystery is standard fare, it's truly a catalyst for delving into Paddy's background and all that's shaped him, with the book excelling as a character study. The detective opens the story by beating, biting, and even spitting on another cop with little provocation (though the motivation is revealed in due course). Nevertheless, Paddy's history generates a good deal of sympathy. The New York mayor, for one, targets him, turning on Paddy when his justified shooting of a career criminal attracts adverse media coverage that results in public riots. In a similar vein, the affair is more indicative of Paddy's self-destruction than self-indulgence. O'Keefe's detective is traditionally gruff but often gleefully so; when asked why he pled the Fifth 29 times in front of a grand jury, he bluntly states that there wasn't a 30th question.
A murder case becomes the springboard for a striking tale of a man coming to terms with his chaotic past.--Kirkus Reviews

1. Shot to Pieces: a novel (A Paddy Durr Novel)