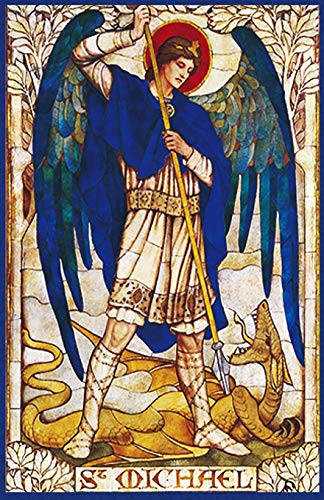 The St Michael ~ The Dragon Defeated is from our Angels of God journal series.

The antique image has been remastered in a matte finish.

The back of the journal features the story of the dragon defeated and the casting down of the devil from heaven by Michael the archangel.

The journal contains 105 pages with a watermark on each lined page.

From the Back Cover
The Dragon Defeated Then a terrible war broke out in heaven Michael and his angels fought against the great dragonThe dragon and his angels fought backBut the dragon did not have the power to win and they could not regain their place in heaven So the great dragon was thrown down once and for all. He was the serpent, the ancient snake called the devil, and Satan, who deceives the whole earthHe was cast down into the earth and his angels along with himThen I heard a triumphant voice in heaven proclaiming:Now salvation and power are set in placeand the kingdom reign of our Godand the ruling authority of his Anointed Oneare establishedFor the accuser of our brothers and sisterswho relentlessly accused themday and night before our Godhas now been defeated—cast out once and for allThey conquered him completelythrough the blood of the Lamband the powerful word of his testimonyThey triumphed because they did not love and clingto their own lives, even when faced with deathJohn of Patmos in the Apocalypsethe Book of Revelation 12:7-11 (TPT)