Items related to Voyage of the Sable Venus: and Other Poems

Lewis, Robin Coste Voyage of the Sable Venus: and Other Poems 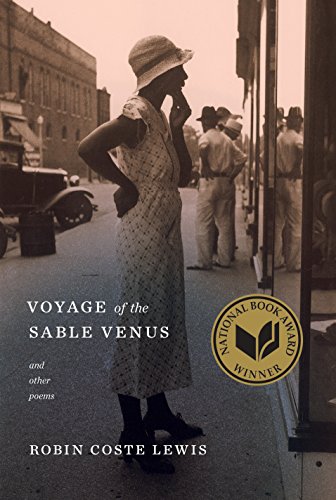 WINNER OF THE NATIONAL BOOK AWARD

A stunning poetry debut: this meditation on the black female figure throughout time introduces us to a brave and penetrating new voice.

Robin Coste Lewis’s electrifying collection is a triptych that begins and ends with lyric poems considering the roles desire and race play in the construction of the self. The central panel is the title poem, “Voyage of the Sable Venus,” a riveting narrative made up entirely of titles of artworks from ancient times to the present—titles that feature or in some way comment on the black female figure in Western art. Bracketed by Lewis’s autobiographical poems, “Voyage” is a tender and shocking study of the fragmentary mysteries of stereotype, as it juxtaposes our names for things with what we actually see and know. Offering a new understanding of biography and the self, this collection questions just where, historically, do ideas about the black female figure truly begin—five hundred years ago, five thousand, or even longer? And what role has art played in this ancient, often heinous story? From the “Young Black Female Carrying / a Perfume Vase” to a “Little Brown Girl / Girl Standing in a Tree / First Day of Voluntary / School Integration,” this poet adores her culture and the beauty to be found within it. Yet she is also a cultural critic alert to the nuances of race and desire and how they define us all, including herself, as she explores her own sometimes painful history. Lewis’s book is a thrilling aesthetic anthem to the complexity of race—a full embrace of its pleasure and horror, in equal parts.

ROBIN COSTE LEWIS is the author of Voyage of the Sable Venus (Knopf, 2015), a National Book Award winner. She is a Provost’s Fellow in Poetry and Visual Studies at the University of Southern California. Lewis is also a Cave Canem fellow and a fellow of the Los Angeles Institute for the Humanities. She received her BA from Hampshire College, her MFA in poetry from NYU, and an MTS in Sanskrit and comparative religious literature from the Divinity School at Harvard University. A previous finalist for the Rita Dove Poetry Award, she has published her work in various journals and anthologies, including The Massachusetts Review, Callaloo, The Harvard Gay & Lesbian Review, Transition: Women in Literary Arts, VIDA, Phantom Limb, and Lambda Literary Review, among others. She has taught at Wheaton College, Hunter College, Hampshire College, and the NYU Low-Residency MFA in Paris. Lewis was born in Compton, California; her family is from New Orleans.

"Powerfully evocative . . . Among the virtues of the collection is the intensity of Lewis’s faith in the power of language and image to tell us things that are true, but that are rarely said, about history, race, gender, power, the body, scholarship, and visual representation. In providing us with a revelatory gloss on centuries of art, Robin Coste Lewis has made us aware of the enormity of the change reflected and perhaps partly brought about by contemporary black women artists whose vision, originality, and humor offer a heartening corrective to the ghastly insult of the Sable Venus." —Francine Prose, New York Review of Books

“Robin Coste Lewis’s Voyage of the Sable Venus is an experimental tribute to a human history that embraces truth and adventure. She shows how cultures traverse terrains and comingle. These poignant poems, through a poetic excavation, unearth figures that make us question racial constructs. The body is at the center of this imagistic inquiry, and each line is a blind stitch in the psychological metrics of the whole. Lewis’s first collection, a detailed tapestry of ancient and modern behavior—names, dates, and emotional marginalia—is one of a kind.”  —Yusef Komunyakaa

"Voyage of the Sable Venus and Other Poems reframes the black figure, most specifically the black female, by pointing out the borders of black beauty, black happiness, and black resilience in our canonical visual culture. Tender and masterful opening and closing poems bookend the archival, lyric masterwork, "Voyage of the Sable Venus," at the center of the collection. This title poem upends the language of representation, collected from the cataloging of the black body in Western art. Robin Coste Lewis takes back depictions of the black feminine and refuses to land or hold down that which has always been alive and loving and lovely. Altogether new, open, experimental and ground-breaking, Lewis privileges real life in all its complications, surprises and triumphs over the frames that have locked down the scale of black womanhood.” —Claudia Rankine