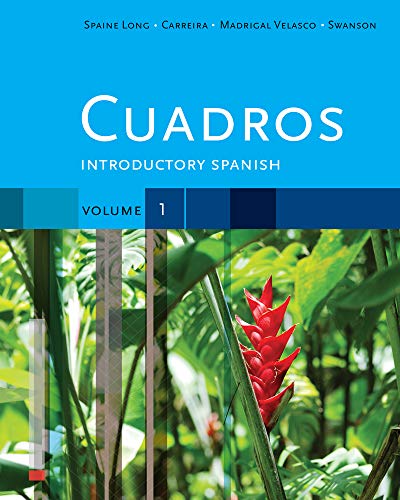 CUADROS is Heinle's new 4-VOLUME INTRODUCTORY and INTERMEDIATE Spanish program. It was developed to address the needs of the 4-SEMESTER and 4-QUARTER Spanish course sequence taught at most 2- and 4- year colleges and universities. All 4 volumes are designed to help you connect to the language and cultures of the Spanish-speaking world. Throughout the program, cultural themes and related activities encourage you to engage in meaningful communication. CUADROS' realistic pacing of material, easy-to-use grammar, practical vocabulary, engaging videos, and robust technology package work together to help you gain confidence and move quickly toward proficiency. CUADROS' 4-volume configuration allows you to pay as you go - buy what you need when you need it... Grammar overview of CUADROS (please refer to Table of Contents for a full Scope and Sequence): CUADROS Volume 1 (1st Semester or 1st Quarter) includes: Present Tense including Reflexive Verbs. CUADROS Volume 2 (2nd Semester or 2nd Quarter) includes: Present Subjunctive, Future Tense, Present and Past Perfect. CUADROS Volume 3 (3rd Semester or 3rd Quarter) includes: Preterite & Indirect as well as Commands. CUADROS Volume 4 (4th Semester or 4th Quarter) includes: Conditional, Imperfect Subjunctive, and Future & Conditional Perfect.

Sheri Spaine Long (Ph.D. UCLA) is Editor of Hispania - A journal devoted to the teaching of Spanish and Portuguese, the scholarly journal of the American Association of Teachers of Spanish and Portuguese (AATSP). Formerly a faculty member, department chair, and study abroad program director, Dr. Long rose to the rank of Professor of Spanish at the University of Alabama at Birmingham and was appointed Distinguished Visiting Professor at the United States Air Force Academy. Most recently, Dr. Long served as Professor and Chair of the Department of Languages and Culture Studies at the University of North Carolina at Charlotte. She is a specialist in language teaching and learning. A regular presenter and invited speaker at national and international conferences, Dr. Long delivered over 100 talks from Havana to Beijing and across the United States. She actively engages the field and continues to publish on the integration of leadership development and language learning, the language profession, and Madrid in literature. Dr. Long published more than 50 articles, chapters, and reviews and her recent co-authored textbooks published with Cengage include Nexos. Introductory Spanish, 4th ed., and Alianzas. Intermediate Spanish., 2nd ed., Cuadros. Introductory and Intermediate Spanish., among others. She received the prestigious Steiner Award for Leadership in Foreign Language Education from the American Council on the Teaching of Foreign Languages (ACTFL) in 2009.

Sylvia Madrigal, a Yale graduate, has been in the foreign language publishing field for about 20 years. She has worked at Houghton Mifflin and at D.C. Heath, where she helped develop and write activities for the award-winning Dimelo CD-ROM series. She has authored a variety of educational materials, including video scripts for HM's TravelTour video and Caminos del jaguar.

Kris Swanson has an M.A. in Hispanic Studies from Brown University. She has been in the foreign language publishing field for about 15 years. She currently works as a consultant and freelance writer, editor, and project manager.

Maria Carreira is Associate Professor of Spanish at California State University, Long Beach. She holds a Ph.D. in linguistics from the University of Illinois, Champaign. Carreira has written linguistic notes, profiles of well-known Hispanics, and heritage learner annotations. She is active in issues relating to heritage learners.