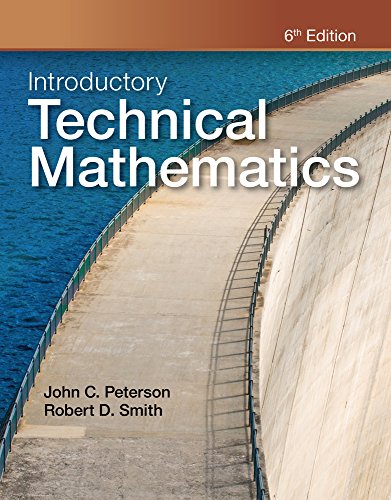 With an emphasis on real-world math applications, the Sixth Edition of INTRODUCTORY TECHNICAL MATHEMATICS provides readers with current and practical technical math applications for today's sophisticated trade and technical work environments. Straightforward and easy to understand, this hands-on book helps readers build a solid understanding of math concepts through step-by-step examples and problems drawn from various occupations. Updated to include the most current information in the field, the sixth edition includes expanded coverage of topics such as estimation usage, spreadsheets, and energy-efficient electrical applications.

John C. Peterson is a retired professor of mathematics at Chattanooga State Technical Community College in Chattanooga, Tennessee. Following a career in industry, Dr. Peterson taught at the middle school, high school, two-year college, and university levels. He is the author or coauthor of four other Cengage Learning books: MATH FOR THE AUTOMOTIVE TRADE, TECHNICAL MATHEMATICS, TECHNICAL MATHEMATICS WITH CALCULUS, and MATHEMATICS FOR MACHINE TECHNOLOGY. He was also a member of the four-person team that revised and interpreted the two-year college portion of the 2015 College Board of Mathematical Sciences cross-sectional survey of undergraduate mathematical science programs. In addition, Dr. Peterson has published more than 90 papers in various journals, given more than 200 presentations, and served as a vice president of The American Mathematical Association of Two-Year Colleges.

Robert D. Smith was Associate Professor Emeritus of Industrial Technology at Central Connecticut State University, New Britain, Connecticut. In addition to his teaching experience, Mr. Smith worked in the manufacturing industry as a tool designer, quality control engineer, and chief manufacturing engineer. He has also been active in teaching applied mathematics, physics, and industrial materials and processes on the secondary school level and in apprenticeship programs.