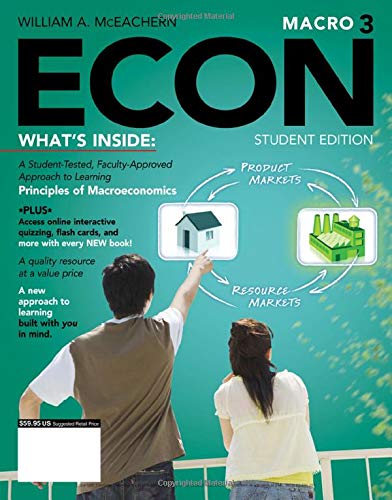 Created through a "student-tested, faculty-approved" review process with numerous students and faculty, ECON: MACRO, 3E is an engaging, accessible solution designed to accommodate the diverse lifestyles of today's learners without sacrificing content. ECON: MACRO, 3E truly leads by example as award-winning teacher and author Will McEachern uses familiar examples and illustrations drawn from actual daily life to vividly demonstrate how readers have been intuitively making economic choices and dealing with economic institutions and events their entire lives. With a user-friendly approach, McEachern connects these life experiences to key macroeconomic concepts and today's latest economic developments and events.

Dr. William A. McEachern began teaching large sections of economic principles shortly after joining the University of Connecticut. Several years later he began offering teaching workshops around the country. The University of Connecticut Alumni Association conferred on him its Faculty Excellence in Teaching Award in 2000. He earlier won the Association's award for Distinguished Public Service. Dr. McEachern has published books and monographs on public finance, public policy, and industrial organization, including MANAGERIAL CONTROL AND PERFORMANCE (D.C. Heath and Company). His research has also appeared in edited volumes, such as READINGS IN PUBLIC CHOICE ECONOMICS (University of Michigan Press), INTERNATIONAL HANDBOOK ON TEACHING AND LEARNING ECONOMICS (Edward Elgar Publishing), and RETHINKING ECONOMIC PRINCIPLES (Irwin Publishing), He has also published in a variety of refereed journals, including Economic Inquiry, National Tax Journal, Quarterly Review of Economic and Business, Journal of Industrial Economics, Kyklos, Econ Journal Watch, and Public Choice. His principles of economics textbooks have been translated into Spanish, Chinese, and Bahasa Indonesia, and have been adapted for Australia and for India. He is the founding editor of THE TEACHING ECONOMIST, a newsletter that for a quarter of a century has focused on teaching economics at the college level. Dr. McEachern has advised federal, state, and local governments on policy matters and has been quoted in media such as the New York Times, Times of London, Wall Street Journal USA Today and Reader's Digest. He, earned an undergraduate degree with honors from College of the Holy Cross, served three years as a U.S. Army officer, and earned an M.A. and Ph.D. in economics from the University of Virginia.