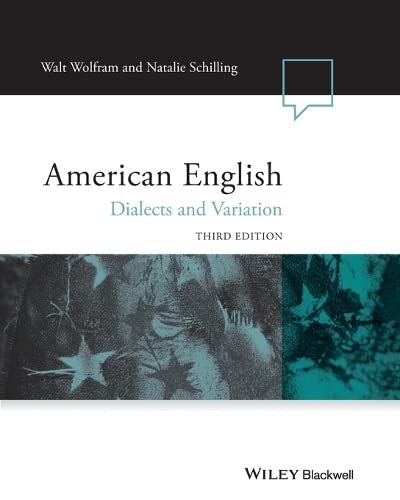 The new edition of this classic text chronicles recent breakthrough developments in the field of American English, covering regional, ethnic, and gender-based differences.

A thoroughly revised and updated edition of the classic text, American English: Dialects and Variation 3e chronicles the ongoing story of language variation in American English. For the first time, this textbook is accompanied by a companion website hosting a  wealth of audio and video clips that enhance the themes and discussions of the text. The authors explore contexts   ranging from historically isolated, rural dialects to developing, urban ethnic varieties, and include new discussions on Jewish English and Asian-American English to complement coverage on African-American, Latino, Cajun, and Native American English,  as they guide the reader through the evolving theoretical framework of variationist sociolinguistics and its recent breakthroughs.

The engaging and accessible style of this book has long made it a favorite of students and professors alike; with its new features, including a glossary and extensive appendix of pronunciation and lexical features of American Englishes, it is sure to be a mainstay of sociolinguistics classes for years to come. About the Author:

Walt Wolfram is William C. Friday Distinguished University Professor at North Carolina State University, and has authored numerous books including The Development of African American English (with Erik Thomas, Blackwell, 2002) and American Voices (co-edited with Ben Ward, Blackwell, 2006). His most recent book is Talkin’ Tar Heel: How Our Voices Tell the Story of North Carolina (2014).

Natalie Schilling is Associate Professor of Linguistics at Georgetown University. She is co-editor of The Handbook of Language Variation and Change, second edition (with J. K. Chambers, 2013, Wiley), and author of Sociolinguistic Fieldwork (2013).

Book Description John Wiley & Sons Inc, United States, 2015. Paperback. Condition: New. 3rd Edition. Language: English. Brand new Book. The new edition of this classic text chronicles recent breakthrough developments in the field of American English, covering regional, ethnic, and gender-based differences. * Now accompanied by a companion website with an extensive array of sound files, video clips, and other online materials to enhance and illustrate discussions in the text * Features brand new chapters that cover the very latest topics, such as Levels of Dialect, Regional Varieties of English, Gender and Language Variation, The Application of Dialect Study, and Dialect Awareness: Extending Application, as well as new exercises with online answers * Updated to contain dialect samples from a wider array of US regions * Written for students taking courses in dialect studies, variationist sociolinguistics, and linguistic anthropology, and requires no pre-knowledge of linguistics * Includes a glossary and extensive appendix of the pronunciation, grammatical, and lexical features of American English dialects. Seller Inventory # AAH9781118390221

Book Description Condition: New. Brand New Original US Edition.We Ship to PO BOX Address also. EXPEDITED shipping option also available for faster delivery.This item may ship fro the US or other locations in India depending on your location and availability. Seller Inventory # AUDECC-29809