Items related to Arduino For Dummies 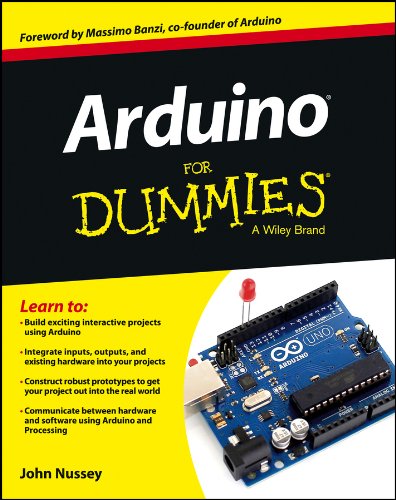 The quick, easy way to leap into the fascinating world ofphysical computing

This is no ordinary circuit board. Arduino allows anyone,whether you're an artist, designer, programmer or hobbyist, tolearn about and play with electronics. Through this book you learnhow to build a variety of circuits that can sense or control thingsin the real world. Maybe you'll prototype your own product orcreate a piece of interactive artwork? This book equips you witheverything you'll need to build your own Arduino project, but whatyou make is up to you! If you're ready to bring your ideas into thereal world or are curious about the possibilities, this book is foryou.

? Easy does it ? work through Arduino sketches line by linein plain English, to learn of how a they work and how to write yourown

? Solder on! ? Only ever used a breadboard in the kitchen?Don't know your soldering iron from a curling iron? No problem,you'll be prototyping in no time

? Kitted out ? discover new and interesting hardware to makeyour Arduino into anything from a mobile phone to a geigercounter!

? Become an Arduino savant ? learn all about functions,arrays, libraries, shields and other tools of the trade to takeyour Arduino project to the next level.

? Get social ? teach your Arduino to communicate withsoftware running on a computer to link the physical world with thevirtual world

It's hardware, it's software, it's fun! Start building the nextcool gizmo with Arduino and Arduino For Dummies.

Q & A with John Nussey, author of Arduino for Dummies

John Nussey What is the best way for new Arduino users to get started?

I'd say the best way get started with Arduino is to find a workshop near you and see where it takes you. Workshops really accelerate your learning and put you in an environment with like-minded people. I've met all kinds of interesting people through workshops. Sometimes they'll open your eyes to completely new "scenes" that you wouldn't know about otherwise, and other time, you'll find people that might be excited about exactly the same things as you.

What is your all-time favorite Arduino project that you've either worked on or heard about from someone else?

My own favourite project is the Pen Nib Dress that I made with Steven Tai. It's my favourite purely because it's so beautiful to look at. It's maybe a little impractical (weighing about 5 kg. or just over 11 lbs.) for the poor model who had to wear it but that's the way it is with prototypes!

Why do you think Arduino has become such a popular device, especially for tech hobbyists?

Arduino is cheap and easy to use, but I don't think that either of these is the main reason that it's so popular. The community around it is what's so remarkable and this is something that you see on the Arduino forums. If they were entirely populated by one group of people, whether it were artists, designers, programmers, engineers or hobbyists, then it wouldn't work, but there seems to be an excellent ecosystem of people on the forum pages to both ask new and challenging questions as well as to answer them.

How do you think Arduino has influenced interactive design projects?

Arduino has made it possible to quickly and easily get a lot of concepts into the real world. Students can build prototypes that actually work for their final shows and design studios can build the interactive elements of a project themselves without needing an entire technical company to partner with. This allows people to make their ideas a reality, which makes it easier to convey them to a client and also to see if they work the way you expect. I believe that prototyping is an essential process and skill to have in the design industry today and that through this process you will understand more about your project or idea than any number of sketches, renderings or simulations can teach you.

Any advice for someone who may be interested in Arduino, but not sure what it's all about?

Get Googling! It's all out there on the net: talks, workshops, resources, kits, and more. Once you've seen a few other projects, you'll have an idea of what's possible and what's interesting to you, then you can think about your own projects and how Arduino can help you solve a problem or maybe just create something interesting.

What should people expect when they open a copy of Arduino For Dummies?

Arduino For Dummies is written for not-technical people that are interested in learning more about technology. The first part of the book gets you familiar with Arduino and what it involves, then there are some simple examples to teach you the fundamentals that you'll need to know before you go further. Later on there's a bit of inspiration to get you thinking about the kind of projects that you can build, a bit of practical advice to get your prototyping skills up to scratch, and then the book dives into a few more advanced uses to give you an idea of what's possible with this fantastic little board!

The quick, easy way to leap into the fascinating world ofphysical computing

Arduino is no ordinary circuit board. Whether you're an artist,a designer, a programmer, or a hobbyist, Arduino lets you learnabout and play with electronics. You'll discover how to build avariety of circuits that can sense or control real-world objects,prototype your own product, and even create interactive artwork.This handy guide is exactly what you need to build your own Arduinoproject — what you make is up to you!

Open the book and find: