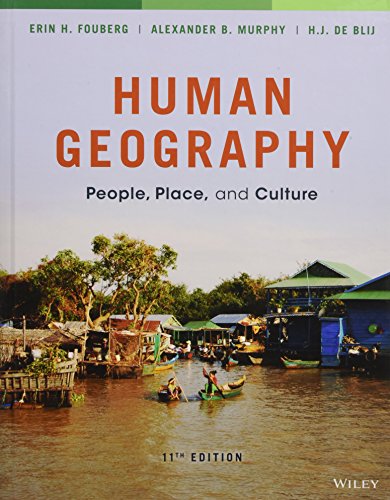 Fouberg’s Human Geography, 11th Edition teaches students to appreciate the diversity of people, places, and cultures, and understand the role people play in shaping our world. The goals of this edition are to provide geographic context to global, regional, national and local issues and to teach students to think geographically and critically about these issues. Human Geography: People, Place, and Culture features beautifully designed maps, dozens of vibrant photographs taken by the author team, and author and guest field notes that help students see how geographers read cultural landscapes and use fieldwork to understand places. A newly designed demographic data table includes economic, political, and population data, all of which can be examined in ArcGIS Online.

Author, professor and television personality Harm de Blij (pronounced duh Blay) for seven years was the popular Geography Editor on ABC's "Good Morning America". In 1996 he joined NBC News as Geography Analyst, appearing mostly on MSNBC. His series "The Power of Place" continues to air on PBS stations.
Born in the Netherlands, de Blij has a unique range of educational experiences. He received his early schooling in Europe (part of it during the Second World War as recounted in his memoir Wartime Encounter), his college education in Africa, and his higher degrees (Ph.D., Northwestern) in the United States. His scholarly work has been recognized through honorary degrees awarded by Marshall University, Rhode Island College, Grand Valley State University, North Carolina State University, and Michigan State University.
Dr. de Blij has published more than 30 books including scientific, educational, and trade titles, and over 100 articles. His textbook Geography: Realms, Regions and Concepts (Wiley) has exceeded 1 million copies in 11 editions since 1970.
He specializes in geopolitical and environmental issues, and has held named chairs at Georgetown University, Marshall University, and the Colorado School of Mines. Dr. de Blij currently is Distinguished Professor of Geography at Michigan State University, where he also taught throughout the decade of the 1960s. In the interim, he chaired the Geography Department at the University of Miami and served as editor at the National Geographic Society. His advocacy of Geography in the media and on the public lecture circuit has taken him to virtually all corners of the United States; his work in research, teaching, and television has spanned the globe. In 1994 National Geographic Society President Gilbert Grosvenor appointed Dr. de Blij an Honorary Life Member of the Society.

Shipping: US$ 11.93
From United Kingdom to U.S.A.
Destination, rates & speeds