Items related to Logic and Philosophy: A Modern Introduction

Logic and Philosophy: A Modern Introduction 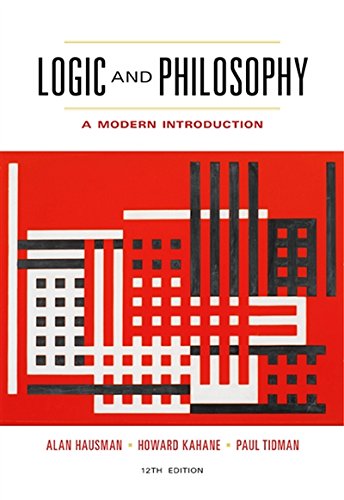 This text is designed for readers desiring a comprehensive introduction to formal logic that is both rigorous and accessible to those encountering the subject for the first time. Abundant carefully crafted exercise sets accompanied by a clear, engaging exposition give readers a firm grasp of basic concepts, which build to an exploration of sentential logic, first-order predicate logic, the theory of descriptions, and identity. As the title suggests, this is a book devoted not merely to logic; readers will also examine the philosophical debates that led to the development of the field.

Alan Hausman received a Ph.D. in philosophy from Iowa State University and now teaches philosophy at Hunter College. He has published extensively on history of early modern philosophy, especially on the work of Hume, and on the work of Nelson Goodman.

Howard Kahane received a master's degree from the University of California at Los Angeles and a Ph.D. from the University of Pennsylvania. He was a professor of philosophy at Bernard M. Baruch college in New York and is considered one of the founders of the critical-thinking movement, an approach to logic that makes it less abstract and more practical as a tool for analyzing political and social issues.

Paul Tidman received his Ph.D. in philosophy from the University of Notre Dame. He teaches philosophy at Mount Union College in Ohio.

"The book develops formal logic rigorously, but with an approach that students will find clear and accessible, especially with respect to the explanations of key concepts and the featured "walk-throughs" of proof techniques, etc."

"I would describe the book as a 'real logic book that is about as accessible as it gets."

1. Logic and Philosophy: A Modern Introduction

2. Logic and Philosophy: A Modern Introduction

3. Logic and Philosophy: A Modern Introduction