Items related to Band of Giants: The Amateur Soldiers Who Won America's...

Band of Giants: The Amateur Soldiers Who Won America's Independence 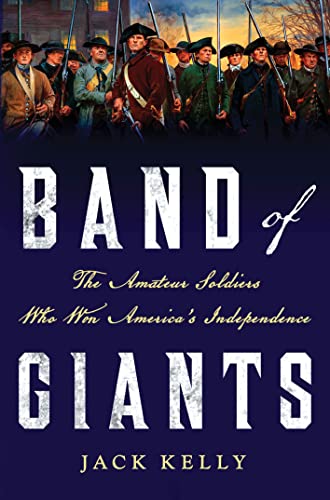 Band of Giants brings to life the founders who fought for our independence in the Revolutionary War. Jefferson, Adams, and Franklin are known to all; men like Morgan, Greene, and Wayne are less familiar. Yet the dreams of the politicians and theorists only became real because fighting men were willing to take on the grim, risky, brutal work of war. We know Fort Knox, but what about Henry Knox, the burly Boston bookseller who took over the American artillery at the age of 25? Eighteen counties in the United States commemorate Richard Montgomery, but do we know that this revered martyr launched a full-scale invasion of Canada? The soldiers of the American Revolution were a diverse lot: merchants and mechanics, farmers and fishermen, paragons and drunkards. Most were ardent amateurs. Even George Washington, assigned to take over the army around Boston in 1775, consulted books on military tactics. Here, Jack Kelly vividly captures the fraught condition of the war―the bitterly divided populace, the lack of supplies, the repeated setbacks on the battlefield, and the appalling physical hardships. That these inexperienced warriors could take on and defeat the superpower of the day was one of the remarkable feats in world history.

Jack Kelly is a journalist, novelist, and historian. He has contributed to American Heritage, American Legacy, Invention & Technology, among other national periodicals, is a New York Foundation for the Arts fellow in Nonfiction Literature, as well as author of Gunpowder: Alchemy, Bombards, and Pyrotechnics: The History of the Explosive That Changed the World. He has appeared on The History Channel , been interviewed on National Public Radio , and conducted book signings across the country. He lives near Kingston in New York's Hudson Valley, where much of the action of the Revolutionary War took place.

“Lively narrative of the Revolutionary War realistically assesses the motley collection of men who led the military struggle against Britain, revealing both their strengths and weaknesses.” ―The Wall Street Journal

“With vivid details and incisive characterizations, Jack Kelly tells how unlikely young Americans--an asthmatic Quaker with a limp, an overweight bookseller, a barely literate backwoods wagon master--discovered in 1776 an ability to outthink and outfight the generals and soldiers of the best army in the world. Readers will finish this fascinating book with a sense of awe--and a renewed faith in America's ability to overcome daunting challenges.” ―Thomas Fleming, author of Liberty! The American Revolution

“Jack Kelly has written a superb account of the American soldiers who won our independence against great odds. Band of Giants is a masterfully descriptive account of their experiences that tells us, in his wonderful style, who these remarkable men were. This is a must read for all Americans who want to truly know those who forged our magnificent nation.” ―General Anthony C. Zinni USMC (Retired)

“Armed with the latest research burnished by a bright, brisk writing style, Jack Kelly has done a masterful job of retelling the story of the Revolutionary War by focusing on the key figures and battles of the long-protracted military struggle that undergirded the political war for independence. His cast of Cincinnatus-like amateurs put aside their plows, lock up their shops, kiss their wives goodbye and strap on their shields and bucklers. Facing the hangman's noose if they fail, they outfight, outmaneuvered and outlast the thousands of professional killers and bungling courtier-generals arrayed against them. This book is highly recommended for anyone seeking to understand the birth of the United States.” ―Willard Sterne Randall, award-winning Founding Fathers biographer-historian

“Jack Kelly has managed to accomplish something remarkable in Band of Giants: to give a concise and accurate overview of the Revolutionary War without losing the intimacy and detail that go into a good yarn. And in doing so, Kelly shows us the essence of the Revolutionary miracle -- that America owes its independence to a group of military amateurs...talented and tough, but amateurs all the same.” ―Paul Lockhart, author of The Whites of Their Eyes

“Jack Kelly's Band of Giants is a sprightly and illuminating history of the Revolutionary War. It captures the terror of battle, the ecstasy of victory, the character of the leading generals, and the travail of the ordinary soldiers. Readers will take from this engaging book a better understanding of the true nature of America's struggle to win independence.” ―John Ferling, author of Jefferson and Hamilton: The Rivalry that Forged a Nation

“Jack Kelly's superb writing enhances this fast-paced account of the Revolutionary War. Kelly doesn't just narrate a series of events. Instead, he reveals the war's most compelling dramas and personalities, giving the reader a sense of what it was like to experience the Revolution firsthand. Band of Giants is both entertaining and informative.” ―Edward G. Lengel, author of General George Washington: A Military Life

“Jack Kelly's shrewd novelist's eye and the narrative velocity that propels his writing should make any student of history delighted that he is turning his formidable gifts to telling the great founding tale of the American republic.” ―Richard Snow, former editor-in-chief, American Heritage, author of I Invented the Modern Age: The Rise of Henry Ford

". . . mandatory reading for anyone who seeks to understand the true nature of the Revolutionary era in American history." -Army Magazine

1. Band of Giants: The Amateur Soldiers Who Won America's Independence

2. Band of Giants: The Amateur Soldiers Who Won America's Independence

Book Description Palgrave Macmillan Trade, U.S.A., 2014. Hardcover. Condition: New. 1st Edition. THERE IS A BLACK "CLOSEOUT/REMAINDER" MARK ON THE BOTTOM PAGE EDGES. The fighting men who turned the ideas of the Founders into reality were a diverse and surprising group of Americans. In this concise, riveting narrative of the Revolutionary War, Jack Kelly paints a moving portrait of its principal soldiers: merchants and mechanics, farmers and fishermen, paragons and drunkards. Most were ardent amateurs. Even George Washington, who was assigned to take over the brand-new Continental Army in 1775, consulted books on military tactics. Henry Knox, the burly Boston bookseller who took over the American artillery at the age of 25, had never been in combat. Nathanael Greene -- brilliant, but insecure -- was a pacifist Quaker who became the youngest of the American generals. Hulking Virginia backwoodsman Daniel Morgan relied on his deeply democratic instincts and his skill as a bare-knuckle fighter. Focusing on a series of pivotal battles, BAND OF GIANTS vividly captures the fraught conditions of the war -- the divided populace, the lack of supplies, the setbacks on the battlefield, and the appalling physical hardships. In one of the most remarkable feats in world history, a group of inexperienced warriors confronted and defeated the superpower of the day, an accomplishment that turned them into a band of historical giants. THERE IS A BLACK "CLOSEOUT/REMAINDER" MARK ON THE BOTTOM PAGE EDGES. Seller Inventory # 000081

3. Band of Giants: The Amateur Soldiers Who Won America's Independence.

Book Description Palgrave Macmillan. HC. Condition: New. The soldiers of the Revolutionary War were merchants and mechanics, farmers and fishermen, paragons and drunkards. The populace was divided, supplies were unsatisfactory, and the physical hardships were appalling. But this group of inexperienced warriors confronted and defeated the superpower of the day. Seller Inventory # 9781137278777

4. Band of Giants: The Amateur Soldiers Who Won America's Independence

5. Band of Giants: The Amateur Soldiers Who Won America's Independence