Items related to Social Media and Politics in Central and Eastern Europe... 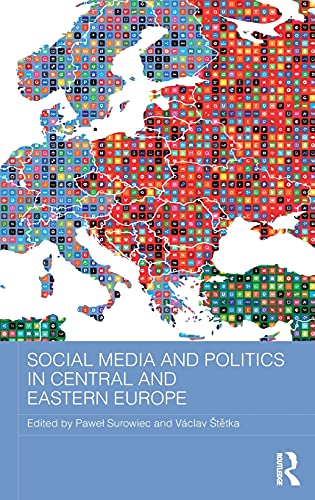 Social media are increasingly revolutionising the ways in which political communication works, and their importance for engaging citizens in politics and public affairs is well understood by political actors. This book surveys current developments in social media and politics in a range of Central and Eastern European countries, including Ukraine and Russia. It explores the process of adoption of social media by politicians, journalists and civic activists, examines the impact of the different social and cultural backgrounds of the countries studied, and discusses specific political situations, such as the 2012 protests in Moscow and the 2014 EuroMaidan events in Ukraine, where social media played an important role. The book concludes by addressing how the relationship between social media and politics is likely to develop and how it might affect the still relatively new democracies in the region.

Paweł Surowiec is Senior Lecturer in the Faculty of Media and Communication at Bournemouth University, UK.

Václav Štětka is Lecturer in the Department of Social Sciences at Loughborough University, UK.

"The volume by Pawel Surowiec and Václav Štětka fills an important gap in the growing body of literature on the role of digital media in political life. In this literature, the experience of Central and Eastern Europe is largely missing. The contributions of this book provide fascinating insights into how political parties and social movements use social media in a world of institutional instability and the return of authoritarianism. The book highlights the importance of context for the understanding of online politics and is a must-read for everybody who seeks to explore the politics of social media outside the Western world. It’s the similarities, not the expected differences, with the established democracies of the West that will surprise the reader." - Katrin Voltmer, Professor of Communication and Democracy, University of Leeds

"This book is a very timely and telling investigation of a convoluted and potentially troubling relation between democracy and practices of social media use in political processes. Shedding light on what is still largely and regretfully uncharted territory of political social media use in post-transitional Central and Eastern Europe, the volume highlights both the mobilisation potential of social media in political processes as well as the danger of proclamation of their uniform effects. As nine case studies from the region clearly demonstrate, adoption of new digitalised communication environments into the sphere of politics is best understood as a struggle – not only with political opponents, but also with technological affordances – a struggle as diverse as the political actors using them, and the region where they come from." - Ilija Tomanić Trivundža, President of European Communication Research and Education Association ECREA

"The rise of social media has changed patterns of political communication, and new patterns of political communication have altered the nature of political systems. Among other things, leaders can directly communicate with voters, undermining thereby the mediating role of traditional political parties. However, while social media are often seen as a means of maintaining the status quo and favouring incumbent political actors, they also are a potential means of mobilisation in support of newcomers and hence may challenge established actors. This excellent volume of collected studies by various authors looks into the uses of social media by political actors in some of the former communist countries and attempts to identify differences as well as recurring patterns across the region." - Péter Bajomi-Lázár, Budapest Business School

1. Social Media and Politics in Central and Eastern Europe

2. Social Media and Politics in Central and Eastern Europe

3. Social Media and Politics in Central and Eastern Europe

4. Social Media and Politics in Central and Eastern Europe