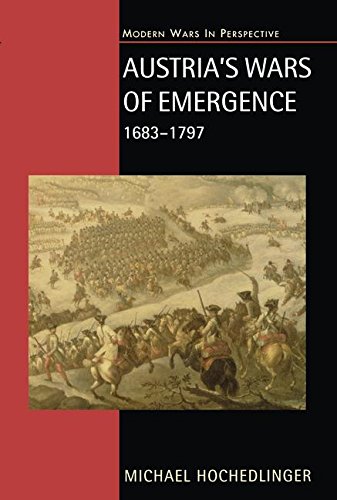 The Habsburg Monarchy has received much historiographical attention since 1945. Yet the military aspects of Austria’s emergence as a European great power in the seventeenth and eighteenth centuries have remained obscure. This book shows that force of arms and the instruments of the early modern state were just as important as its marriage policy in creating and holding together the Habsburg Monarchy.

Drawing on an impressive up-to-date bibliography as well as on original archival research, this survey is the first to put Vienna’s military back at the centre stage of early modern Austrian history.

`Austria¿s Wars of Emergence, 1683-1797¿ spans the period from the second Turkish siege of Vienna in 1683 to the Franco-Austrian peace settlement of 1797. It is the first comprehensive work ever to put Vienna¿s far-reaching military commitments and the enormous pressure these necessarily brought to bear on the Monarchy¿s political, administrative and social structure at the centre stage of early modern Austrian history.

Michael Hochedlinger makes it abundantly clear that the Habsburg Monarchy, contrary to the conventional cliché, was neither created nor held together by the dynasty¿s famed marriage policy alone but rather by force of arms and the instruments of the early modern power-state.

The struggle for survival within the ever more competitive European states-system forced the Austrian Habsburgs to transform, slowly but steadily, their central and eastern European territories from a bewilderingly complex and backward conglomeration into a centralized state. After decades of truly revolutionary reforms from above in the Age of Enlightened Absolutism (1740-1790) the Habsburg Monarchy certainly ranked with the most advanced polities of Europe. It was also one of the most highly militarized states, second only to Austria¿s arch-enemy Prussia.

Michael Hochedlinger is Senior Archivist at the Austrian State Archives. He is an expert on the history of the early modern Habsburg army.

Michael Hochedlinger is Senior Archivist at the Austrian State Archives. He is an expert on the history of the early modern Habsburg army.