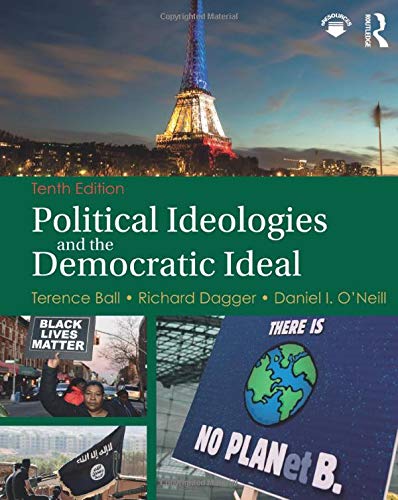 Political Ideologies and the Democratic Ideal analyzes and compares political ideologies to help readers understand individual ideologies, and the concept of ideology, from a political science perspective. This best-selling title promotes open-mindedness and develops critical thinking skills. It covers a wide variety of political ideologies from the traditional liberalism and conservatism to recent developments in identity politics, green politics, and radical Islamism.

NEW TO THIS EDITION

Richard Dagger earned his Ph.D. from the University of Minnesota and is now Professor of Political Science at the University of Richmond. He has taught at Arizona State University and Rhodes College, and has been a faculty fellow of the Center for Ethics and Public Affairs, Tulane University.

For philosophical depth and breadth of coverage, Political Ideologies and the Democratic Ideal is simply without peer. It is the best political-ideologies textbook on the market, and its use of the concept of freedom to unify the analyses of ideologies as diverse as socialism, liberalism, conservatism, fascism, and political Islam is both innovative and insightful. The tenth edition does an even better job than earlier editions of connecting these ideologies to practical politics, as in its new discussions of Citizens United, the Black Lives Matter movement, and Putin's expansionist foreign policy.

Ball, Dagger, and O’Neill cover a staggering range of material in this carefully conceived and cogently written text. That they do so while balancing serious attention to the historical contexts out of which ideologies emerge, with a keen sense of their relevance to contemporary problems and debates, makes this an impressive achievement.

It is a real pleasure to see a new edition of this classic in the field of political theory and political ideologies. This edition retains the original perceptive framework of analysis, but it now also includes crucial and insightful updates on topics like Black Lives Matter and the Islamic State (ISIS). It should remain an excellent vehicle for instruction.

I have used Political Ideologies and the Democratic Ideal through multiple editions as required reading for an Intro to Political Science course. I particularly appreciate its exploration of a comprehensive array of both historical and contemporary ideologies and its writing at a level to make those understandable to an undergraduate audience. The latest edition combines new scholarship about long-standing ideologies and coverage of new developments regarding freedom of speech, Islamist ideologies, environmentalism, and so on.

Ball, Dagger, and O'Neill's Political Ideologies and the Democratic Ideal is what students of politics have been waiting for--a thoughtful, critical, accessible, and engaging analysis of political ideologies. An outstanding update to previous editions, this text will serve students and professors of politics well.

1. Political Ideologies and the Democratic Ideal

6. Political Ideologies and the Democratic Ideal