Items related to US Foreign Policy Towards the Middle East: The Realpolitik...

US Foreign Policy Towards the Middle East: The Realpolitik of Deceit (Routledge Global Security Studies) 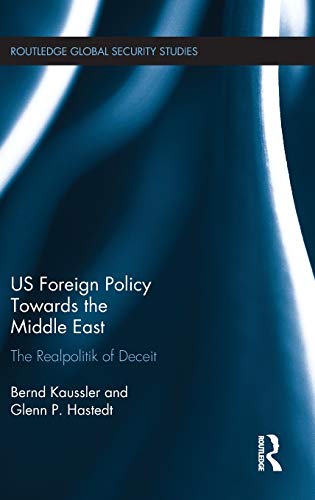 This book offers a realist critique of US foreign policy towards the Middle East in the past decade.

It critically examines four core foundations of contemporary US Middle East policy: US relations with Saudi Arabia after the Arab Spring; US diplomacy towards Iran and the Obama administration’s policy of engagement; the road to, and aftermath of, the 2003 US-led invasion of Iraq; and US policy towards nuclear-armed Israel. Because of a closely guarded bipartisan consensus, these four core foundations of contemporary US Middle East policy have largely evaded public criticism and scrutiny. This book argues that US strategy towards the Middle East has rarely been guided by order, stability and the national interest. Rather, successive administrations have created a house of cards built on a series of deceptions and constructed perceptions or myths. Combined, these four aspects of US Middle East policy have ushered in a decade of political violence, instability, sectarian divisions and an imbalance of power which has culminated in the territorial disintegration of Iraq and countries in the Levant as well as the rise of ISIS. Moving forward requires a rational pursuit of the national interest based on realist principles.

This book will be of much interest to students of US foreign policy, Middle Eastern politics, security studies and IR in general.

Us Foreign Policy Towards the Middle East: The Realpolitik of Deceit

Shipping: US$ 13.49
From United Kingdom to U.S.A.
Destination, rates & speeds