Items related to Intuitive Eating: A Revolutionary Program That Works 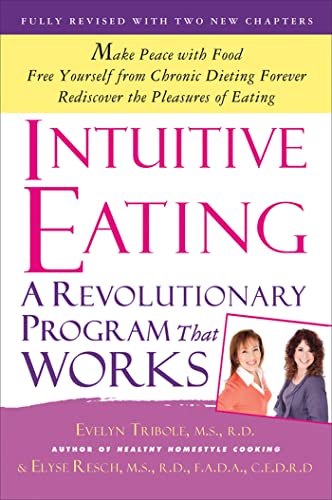 First published in 1995, Intuitive Eating has become the go-to book on rebuilding a healthy body image and making peace with food.

We've all been there―angry with ourselves for overeating, for our lack of willpower, for failing at yet another diet. But the problem is not us; it's that dieting, with its emphasis on rules and regulations, has stopped us from listening to our bodies. Written by two prominent nutritionists, Intuitive Eating will teach you:

· How to reject diet mentality forever
· How our three Eating Personalities define our eating difficulties
· How to find satisfaction in your eating
· How to feel your feelings without using food
· How to honor hunger and feel fullness
· How to follow the ten principles of "Intuitive Eating",
· How to achieve a new and safe relationship with food and, ultimately, your body
· How to raise an "intuitive eater"–NEW!
· The incredible science behind intuitive eating–NEW!

This revised edition includes updates and expansions throughout, as well as two brand new chapters that will help readers integrate intuitive eating even more fully into their daily lives.

Evelyn Tribole, M.S., R.D., is an award-winning registered dietitian with a nutrition counseling practice in Irvine, California, specializing in eating disorders. She has written six books including the million-copy bestseller Healthy Homestyle Cooking. She was the nutrition expert for Good Morning America and was a national spokesperson for the American Dietetic Association for six years.

Elyse Resch, M.S., R.D., F.A.D.A., has been in private practice in Beverly Hills, California, as a nutrition therapist for over twenty years, specializing in eating disorders, Intuitive Eating, and preventative nutrition. A certified child and adolescent obesity expert, she is a fellow of the American Dietetic Association and is also on the advisory board of "Healthy Dining" publications.

But weight loss is not just a women’s issue (although clearly there’s added pressure on women). The proliferation of light-beer commercials has planted the seed of body consciousness in men’s minds, as well—a lean belly is better than a beer belly. It’s no coincidence we’ve seen the launch of magazines aimed at men, such as Men’s Fitness and Men’s Health.
While the pursuit of leanness has crossed over the gender barrier, sadly, we have given birth to the first generation of weight watchers. A disturbing new dieting trend is affecting the health of U.S. children. Shocking studies have demonstrated that school-age children are obsessing about their weight—a reflection of a nation obsessed with diet and weight. Around the country, children as young as six years old are shedding pounds, afraid of being fat, and are increasingly being treated for eating disorders that threaten their health and growth. Societal pressure to be thin has backfired on children.
*   *   *
Dieting not only does not work, it is at the root of many problems. While many may diet as an attempt to lose weight or for health reasons, the paradox is that it may cause more harm. Here’s what our nation has to show for dieting:
• Obesity is higher than ever in adults and children.
• Eating disorders are on the rise.
• Childhood obesity has doubled over the last decade.
• Even though there are more fat-free and diet foods than ever before, nearly two-thirds of adults are overweight or obese.
• Over twelve hundred tons of fat have been liposuctioned from 1982 to 1992. (A recent study showed that only one year after having a liposuction procedure the fat returned, but to a different part of the body.)
• Dieting increases your chance of gaining even more weight than you lost! (See “Dieting Increases Your Risk for Gaining More Weight!”.)
DIETING CAN’T FIGHT BIOLOGY
Dieting is a form of short-term starvation. Consequently, when you are given the first opportunity to really eat, eating is often experienced at such intensity that it feels uncontrollable, a desperate act. In the moment of biological hunger, all intentions to diet and the desire to be thin are fleeting and paradoxically irrelevant. In those moments, we become like the insatiable man-eating plant in the movie Little Shop of Horrors, demanding to eat—“Feed me, feed me.”
While intense eating may feel out of control, and unnatural, it is a normal response to starving and dieting. Yet so often, post-diet eating is viewed as having “no willpower,” or a character defect. But when you interpret post-diet eating as such, it slowly erodes trust in yourself with food, diet after diet. Every diet violation, every eating situation that feels out of control lays the foundation for the “diet mentality,” brick by brick and diet by diet. The seemingly brave solution—try harder next time—becomes as bewildering as the Chinese finger puzzle. You can’t fight biology. When the body is starving, it needs to be nourished.
Yet so often a dieter laments, “If only I had the willpower.” Clearly, this is not an issue of willpower. (Although glowing testimonials from weight loss clinics foster this misplaced blame on willpower.) When underfed, you will obsess about food—whether from a self-imposed diet or starvation.
Maybe you don’t diet but eat vigilantly in the name of health and fitness. This seems to be the politically correct term for “dieting” in the nineties. But for many, it’s the same food issue—with the same symptoms. Avoiding fat or carbohydrates, at all costs, and subsisting virtually on fat-free or carbohydrate-free foods is essentially dieting, and often results in being underfed. There are many forms of dieting and many types of dieters. We will explore your dieting personality and meet the Intuitive Eater in the next chapter.

DIETING INCREASES YOUR RISK FOR GAINING MORE WEIGHT!
If dieting programs had to stand up to the same scrutiny as medications, they would never be allowed for public consumption. Imagine, for example, taking an asthma medication, which improves your breathing for a few weeks, but in the long run, causes your lungs and breathing to worsen. Would you really embark on a diet (even a so-called “sensible diet”), if you knew that it could cause you to gain more weight?
Here are some sobering studies indicating that dieting promotes weight gain:
• A team of UCLA researchers reviewed thirty-one long-term studies on dieting and concluded that dieting is a consistent predictor of weight gain—up to two-thirds of the people regained more weight than they lost (Mann, et al, 2007).
• Research on nearly seventeen thousand kids ages nine to fourteen years old concluded, “… in the long term, dieting to control weight is not only ineffective, it may actually promote weight gain” (Field et al. 2003).
• Teenage dieters had twice the risk of becoming overweight, compared to non-dieting teens, according to a five-year study (Neumark-Sztainer et al. 2006). Notably, at baseline, the dieters did not weigh more than their non-dieting peers. This is an important detail, because if the dieters weighed more it would be a confounding factor (which would implicate other factors, rather than dieting, such as genetics).
A novel study on over 2,000 sets of twins from Finland, aged 16 to 25 years old showed that dieting itself, independent of genetics, is significantly associated with accelerated weight gain and increased risk of becoming overweight (Pietilaineet et al. 2011). Dieting twins, who embarked on just one intentional weight loss episode, were nearly two to three times more likely to become overweight, compared to their non-dieting twin counterpart. Furthermore, the risk of becoming overweight increased in a dose-dependent manner, with each dieting episode.
Studies aside—what have your own dieting experiences shown you? Many of our patients and workshop participants say their first diet was easy—the pounds just melted off. But that first dieting experience is the seduction trap, which launches the futile pursuit of weight loss via dieting. We say futile—because our bodies are very smart and wired for survival.
Biologically, your body experiences the dieting process as a form of starvation. Yo...