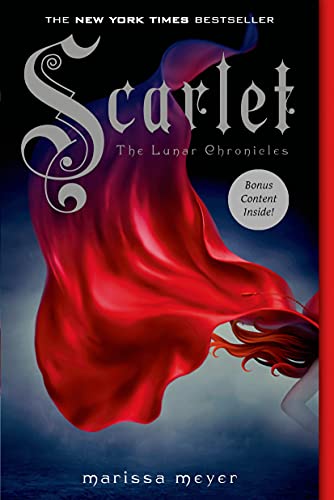 The second book in the #1 New York Times- and USA Today- Bestselling Lunar Chronicles series by Marissa Meyer! Our cyborg heroine teams up with two new characters, Scarlet and Wolf, to defend Earth against a wicked space queen.

"An interesting mash up of fairy tales and sciencefiction . . . a cross between Cinderella, Terminator, and Star Wars."―Entertainment Weekly on the Lunar Chronicles

"Prince Charming among the cyborgs." ―The Wall Street Journal on the Lunar Chronicles

Cinder is back and trying to break out of prison―even though she'll be the Commonwealth's most wanted fugitive if she does―in this second installment from Marissa Meyer.

Halfway around the world, Scarlet Benoit's grandmother is missing. It turns out there are many things Scarlet doesn't know about her grandmother, or the grave danger she has lived in her whole life. When Scarlet encounters Wolf, a street fighter who may have information as to her grandmother's whereabouts, she is loath to trust this stranger, but is inexplicably drawn to him, and he to her. As Scarlet and Wolf unravel one mystery, they encounter another when they meet Cinder. Now, all of them must stay one step ahead of the vicious Lunar Queen Levana.

The adventure continues in this fresh fairytale retelling that combines elements of Cinderella and Little Red Riding Hood.

“A great choice for all ages, with strong appeal for both girls and boys, these novels will be read and enjoyed―repeatedly.” ―VOYA, starred review on Scarlet

“The author has stepped up the intrigue and plot from the first novel, and readers will be eagerly awaiting the next.” ―School Library Journal on Scarlet

“The sci-fi elements are stronger than the fairy-tale allusions this time out, but the story remains just as absorbing. . . . Readers will be thrilled to discover that this steampunky fairy-tale/sci-fi mashup promises two more installments.” ―BCCB on Scarlet

“Further development of this futuristic world plus plenty of action, surprises, and a fast pace will keep readers invested in their journey.” ―The Horn Book on Scarlet

Marissa Meyer's first book in the Lunar Chronicles, Cinder, debuted on the New York Times bestseller list. Marissa lives in Tacoma, Washington, with her husband and their three cats.