Items related to The Elephant Whisperer: My Life with the Herd in the... 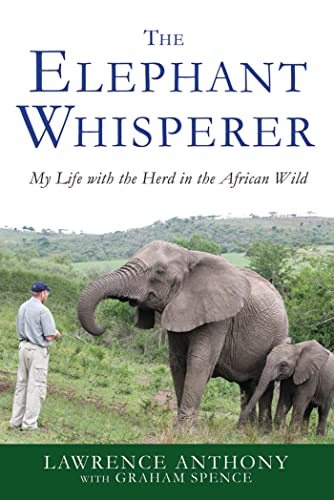 Lawrence Anthony devoted his life to animal conservation, protecting the world's endangered species. Then he was asked to accept a herd of "rogue" wild elephants on his Thula Thula game reserve in Zululand. His common sense told him to refuse, but he was the herd's last chance of survival: they would be killed if he wouldn't take them.

In order to save their lives, Anthony took them in. In the years that followed he became a part of their family. And as he battled to create a bond with the elephants, he came to realize that they had a great deal to teach him about life, loyalty, and freedom.

The Elephant Whisperer is a heartwarming, exciting, funny, and sometimes sad memoir of Anthony's experiences with these huge yet sympathetic creatures. Set against the background of life on an African game reserve, with unforgettable characters and exotic wildlife, Anthony's unrelenting efforts at animal protection and his remarkable connection with nature will inspire animal lovers and adventurous souls everywhere.

Lawrence Anthony (1950-2012) founded the Thula Thula wildlife reserve in Zululand, South Africa; launched The Lawrence Anthony Foundation; and received the UN's Earth Day award for his efforts to save the animals of the Baghdad Zoo. With Graham Spence, he is the author of Babylon's Ark: The Incredible Wartime Rescue of the Baghdad Zoo, The Elephant Whisperer: My Life with the Herd in the African Wild, and The Last Rhinos: My Battle to Save One of the World's Greatest Creatures.

GRAHAM SPENCE is a journalist and editor. Originally from South Africa, he lives in England. Together they also wrote Babylon's Ark: the Incredible Wartime Rescue of the Baghdad Zoo.

In the distance, the percussive shot of a rifle sounded like a giant stick of firewood cracking.

I jumped out of my chair, listening. It was a sound wired into a game ranger’s psyche. Then came a burst . . . crack-crack-crack. Flocks of squawking birds scrambled, silhouetted in the crimson sunset.

Poachers. On the west boundary.

David, my ranger, was already sprinting for the trusty old Land Rover. I grabbed a shotgun and followed, leaping into the driver’s seat. Max, my brindle Staffordshire bull terrier, scrambled onto the seat between us. With all the excitement buzzing he was not going to be left behind.

As I twisted the ignition key and floored the accelerator, David grabbed the two-way radio.

‘Ndonga!’ he bellowed. ‘Ndonga, are you receiving? Over!’

Ndonga was the head of my Ovambo guards and a good man to have on your side in a gunfight, having served in the military. I would have felt better knowing him and his team were on their way but only static greeted David’s attempts to contact him. We powered on alone.

Poachers had been the scourge of our lives since my fiancée Françoise and I bought Thula Thula, a magnificent game reserve in central Zululand. They had been targeting us for almost a year now. I couldn’t work out who they were or where they were coming from. I had talked often with the izinduna – headmen – of the surrounding rural Zulu tribes and they were adamant that their people were not involved. I believed them. Our employees were mainly local and exceptionally loyal. These thugs had to be from somewhere else.

Twilight was darkening fast and I slowed as we approached the western fence and killed the headlights. Pulling over behind a large anthill, David was first out as we eased through a cluster of acacia trees, nerves on edge, trigger fingers tense, watching and listening. Tightly choked pump-action scatterguns with heavy pellets were our weapons of choice against poachers, for in the dark, in the bush, things are about as close and personal as you can get. As any game ranger in Africa knows, professional poachers will shoot first and shoot to kill.

The fence was just fifty yards away. Poachers like to keep their escape route open and I made a circling motion with my arm to David. He nodded, knowing exactly what I meant. He would keep watch while I crawled to the fence to cut off the retreat if a firefight erupted.

An acrid whiff of cordite spiced the evening air. It hung like a shroud in the silence. In Africa the bush is never willingly mute; the cicadas never cease. Except after gunshots.

After a few minutes of absolute stillness, I knew we had been set up. I switched on my halogen torch, sweeping its beam up and down the fence. There were no gaps revealing where a poacher could have cut his way in. David flicked on his torch as well, searching for tracks or blood spoor indicating if an animal had been killed and dragged off.

Nothing. Just an eerie silence.

With no tracks inside the reserve I realized the shots must have been fired from just outside the fence.

As I said that, we heard more shots – muffled but distinctive ‘crumps’ on the far side of the reserve, at least forty-five minutes’ drive on dirt tracks that often are little more than quagmires in the spring rains.

We jumped back into the Land Rover and sped off, but I knew it was hopeless. We had been taken for suckers. We would never catch them. They would be off the reserve with a couple of slain nyala – one of Africa’s most beautiful antelopes – before we got near.

I cursed my foolhardiness. If I had only sent some rangers to the far side instead of charging off blindly, we could have caught them red-handed.

But this proved one thing. I now knew for certain the izindunas who had been claiming my problems were internal – someone operating within the reserve – were spot on. This was not the local community’s work. It was not a few hungry tribesmen and scrawny dogs hunting for the pot. This was a well-organized criminal operation led by someone who followed our every move. How else could they have timed everything so perfectly?

It was pitch-dark when we arrived at the eastern perimeter of the reserve and we traced the scene with our torches. The tracks told the story. Two nyala had been taken with high-velocity hunting rifles. We could see the flattened bloodstained grass from where their carcasses were dragged to a hole in the fence, which had been crudely hacked with bolt cutters. About ten yards outside the fence were the studded muddy tracks of a 4×4 bush vehicle that by now would be several miles away. The animals would be sold to local butchers who would use them for biltong, a dried meat jerky that is much prized throughout Africa.

The light of my torch picked up a bloody tuft of charcoal-grey fur fluttering on the cut fence wire. At least one of the dead bucks was a male – the female nyala is light brown with thin white stripes on her back.

I shivered, feeling old and weary. Thula Thula had been a hunting ranch before I had bought it and I had vowed that would end. No animal would be needlessly killed again on my watch. I didn’t realize how difficult that vow would be to keep.

Despondently we drove back to the lodge. Françoise greeted us with mugs of dark, rich coffee. Just what I needed.

I glanced at her and smiled my thanks. Tall, graceful and very French, she was just as beautiful as the day I had first met her catching a taxi on a freezing London morning twelve years ago.

‘What happened?’ she asked.

‘A set-up. There were two groups. One fired some shots on the far boundary, then watched our Land Rover lights. As soon as we got there, the others bagged two buck on the eastern side.’

I took a gulp of coffee and sat down. ‘These guys are organized; someone’s going to get killed if we’re not careful.’

Françoise nodded. Three days ago the poachers had been so close it felt as if their bullets were whistling a fraction above our heads.

‘Better report it to the cops tomorrow,’ she said.

I didn’t reply. To expect the police to pay much attention to two murdered antelope was pushing it a little.

Ndonga was furious the next morning when I told him that more animals had been shot. He admonished me for not calling him. I said we had tried but failed to get a response.

‘Oh . . . sorry, Mr Anthony. I went out for a few drinks last night. Not feeling too good today,’ he said, grinning sheepishly.

I didn’t feel like discussing his hangover. ‘Can you make this a priority?’ I asked.

He nodded. ‘We’ll catch these bastards.’

I had barely got back to the house when the phone rang. A woman introduced herself: Marion Garaď from the Elephant Managers and Owners Association (EMOA), a private organization comprised of several elephant owners in South Africa that takes an interest in elephant welfare. I had heard of them and the good work they did for elephant conservation before, but as I was not an elephant owner, I had never dealt with them directly.

She got straight to the point. She had heard about Thula Thula and the variety of magnificent indigenous Zululand wildlife that we had. She said she had also heard of how we were working closely with the local population in fostering conservation awareness and wondered . . . would I be interested in adopting a herd of elephant? The good news, she continued before I could answer, was that I would get them for free, barring capture and tra

The Elephant Whisperer: My Life with the Herd in the African Wild Paperback

Elephant Whisperer : My Life With the Herd in the African Wild