Items related to Say Yes to the Duke (House of Brady)

Kramer, Kieran Say Yes to the Duke (House of Brady)

Say Yes to the Duke (House of Brady) 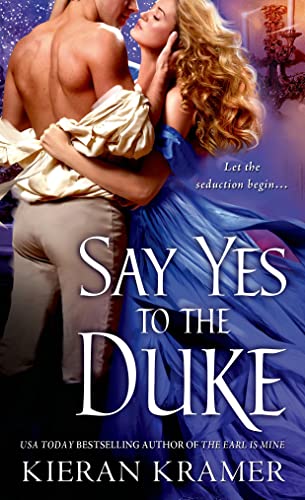 SAY YES TO THE DUKE
Kieran Kramer
Janice Sherwood wants to marry for love, but she's failed to make a match after two Seasons. Her parents, the Marquess and Marchioness of Brady, arrange to send her to the Duke of Halsey's country estate as a short-term guest of his grandmother, the dowager, in hopes that she might win the duke's affections. What they never could have imagined is that Janice would fall for the ruggedly handsome servant Luke, who lives in the stables and carries an air of mystery and temptation.
When Luke Callahan learns that he is the legitimate heir to a dukedom, he will stop at nothing to claim what is his. But first, he must begin a game of disguise to secure his rightful inheritance. Janice isn't part of his plan. But by engaging her in this dance of deception, might he lose her forever?

USA Today bestselling author Kieran Kramer is a former CIA employee, journalist, and English teacher who lives in the Lowcountry of South Carolina with her family. Game show veteran, karaoke enthusiast, and general adventurer, her motto is, "Life rewards action."