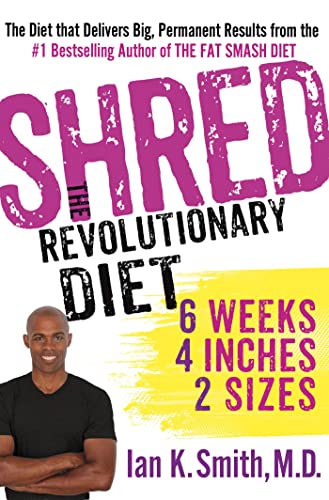 Dr. Ian K. Smith's Shred is the answer to every dieter's biggest dilemmas: how to lose that last twenty pounds? How to push through that frustrating plateau? What to do when nothing else is working? Here, Smith has created a weight loss program that uses all he knows about strategic dieting in one plan--like putting all the best players on the field at once to create a can't lose combination. Shred combines a low GI diet, meal spacing, and meal replacements. Those who follow Shred will constantly be eating (every three and a half hours!), four meals or meal replacements (soups, smoothies, shakes) and 3 snacks a day, over a six week program. Shred also introduces Dr. Ian's concept of "Diet Confusion". Diet Confusion, like muscle confusion, tricks the body and revs up its performance. In the same way you need to vary your workout to see results, switch up your food intake to boost your metabolism.

No matter how often or how unsuccessfully you've dieted before, Shred: The Revolutionary Diet will change your life. Shred has taken the internet by storm, and thousands have already joined Dr. Ian's Shredder Nation, losing an average of four inches, two sizes or twenty pounds in six weeks. Utilizing the detox from Fat Smash Diet, the intense cleanse of Extreme Fat Smash, and varying food of The 4 Day Diet, Shred is a six week plan to a new way of life!

IAN K. SMITH, M.D., is the number one bestselling author of The Fat Smash Diet, Extreme Fat Smash Diet, The 4 Day Diet, Happy, and The Truth About Men. He is a medical contributor on The Rachael Ray Show, host of nationally syndicated radio show HealthWatch, and served as the medical/diet expert for six seasons on VH1's hit Celebrity Fit Club. He is also creator/founder of two national health initiatives: the 50 Million Pound Challenge and the Makeover Mile. A graduate of Harvard, Columbia, and the University of Chicago Pritzker School of Medicine, Dr. Smith was appointed by President Obama to the President's Council on Fitness, Sports, and Nutrition.