Items related to The Art of War: A Jake Grafton Novel (Jake Grafton... 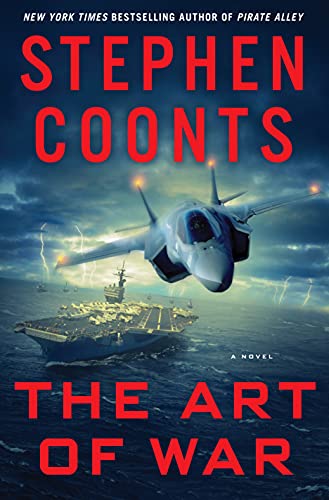 Grafton and Carmellini must prevent a surprise attack far more devastating than Pearl Harbor in this high octane thriller in Stephen Coonts's The Art of War.

“WHEN IT COMES TO MILITARY FICTION, COONTS REMAINS ON EVERY FAN’S A-LIST.”―BOOKLIST
The Chinese dragon is flexing its muscles. As its military begins to prey on neighbors in the South China Sea, attacking fishing vessels and scheming to seize natural resources, America goes on high alert. But a far more ominous danger lurks closer to home: A nuclear weapon has been planted in the harbor at Norfolk, Virginia―site of the biggest naval base on the planet. The target: a secret rendezvous of the Atlantic Fleet aircraft carriers and their battle groups. When the CIA director is assassinated and Jake Grafton is appointed to take his place, Jake gets wind of the conspiracy but has no idea when or where the attack will occur. Meanwhile, a series of assassinations―including an attempt on the life of the President of the United States―shakes the nation and deliberately masks a far more sinister objective. Can Jake and his right hand man, Tommy Carmellini, prevent a catastrophe far more devastating than Pearl Harbor and stop a plot to destroy the U.S. Navy?

STEPHEN COONTS is the New York Times bestselling author of more than thirty novels that have been translated and published around the world. His books include The Disciple, The Assassin, and the Deep Black and Saucers series, among many other bestsellers. A former naval aviator and Vietnam combat veteran, he is a graduate of West Virginia University and the University of Colorado School of Law. He lives in Colorado.

“Stephen Coonts proves once again, he is the master of the ship. This time in the terrorist infested high seas where Grafton and Carmellini, are fully-kitted, synched, and on target. Pirate Alley is full-steam-ahead, action-packed, chaotic, and final--but with black cladded Navy SEALs in the mix, the fight is anything but fair.” ―Dalton Fury, New York Times bestselling author of Kill Bin Laden

“Pirate Alley is fast-moving, scary, and realistic. Starting with a bang, it then gets even better. Steve gives us real pirates, not Johnny Depp with eye shadow.” ―Larry Bond, New York Times bestselling author of Exit Plan

“The one-sit read champion of the season, Stephen Coonts's Pirate Alley races though a maritime terrorist attack in the Red Sea, creating a vivid cast of heroes, victims and villains. It has the feel of a documentary but the soul of an intimate drama, a trick that's extremely hard to pull off.” ―Stephen Hunter, New York Times bestselling author of I, Sniper, Point of Impact and The Third Bullet

“Steve Coonts is a masterful storyteller--and PIRATE ALLEY his most chilling thriller yet. Never will you see the duplicity of world politics--let alone cruise ships and Somali bandits--in the same light again.” ―W.E.B. Griffin & William E. Butterworth IV, bestselling authors of EMPIRE AND HONOR and THE LAST WITNESS

“Start with a band of ruthless Somali pirates in a story that has too often shown up on the front pages of the New York Times, add Jake Grafton and Tommy Carmellini, plus a heavy dose of SEALs on the hunt, and Stephen Coonts's new novel PRIATE ALLEY is one hell of a read! A tale of modern day swashbucklers whose leader is the most ruthless pirate since Blackbeard makes for a book you simply cannot put down. Hats off to Steve for another rip roaring story.” ―David Hagberg, author of Abyss

“A great, realistic read that could mirror current events. Coonts details this ship high-jacking and take-down as if he has first hand experience WITH the SEAL Teams. After reading this, you will want to postpone that cruise that goes anywhere near the Horn of Africa.” ―Howard Wadsin, author of Seal Team Six

“Start Pirate Alley at your peril and then plan for a long night. You won't be able to put it down....Filled with the courage and smarts of Stephen Coonts' SEAL Team heroes.” ―Former Defense Secretary William Cohen