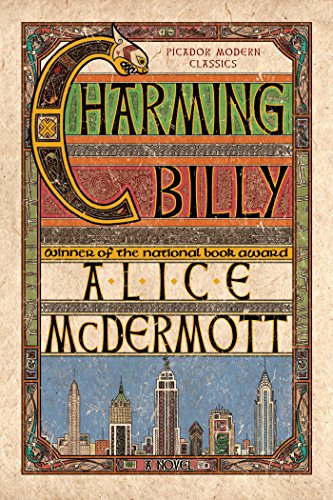 Billy Lynch's family and friends have gathered to comfort his widow, and to pay their respects to one of the last great romantics. As they trade tales of his famous humor, immense charm, and consuming sorrow, a complex portrait emerges of an enigmatic man, a loyal friend, a beloved husband, an incurable alcoholic. Alice McDermott's striking novel, Charming Billy, is a study of the lies that bind and the weight of familial love, of the way good intentions can be as destructive as the truth they were meant to hide.

Charming Billy is the winner of the 1998 National Book Award for Fiction.

Charming Billy is a devastating account of the power of longing and lies, love's tenacity, and resignation's hold. Even at his funeral party, Billy Lynch's life remains up for debate. This soft-spoken, poetry lover's drinking was as legendary among his Queens, New York, family and friends as was his disappointment in love. But the latter, as his cousin Dennis knows, "was, after all, yet another sweet romance to preserve." After World War II, both young men had spent one sun-swept week on Long Island, renovating a house and falling in with two Irish sisters--nannies to a wealthy family--"marveling, marveling still, that this Eden was here, at the other end of the same island on which they had spent their lives."

By the end of their idyll, Billy and Eva were engaged, though she was set to return to County Wicklow. Determined to earn enough money to bring her, her family, and if necessary her entire village back to the U.S., Billy took two jobs, one of which would indenture him for years. But despite the money he sent, Eva never returned, and then was suddenly dead of pneumonia. The true tragedy is that she had simply kept her fare and married someone else--a secret Dennis keeps for the next 30 years as he watches Billy fall into a loveless marriage and the self-administered anesthesia of alcohol.

Alice McDermott's quiet, striking novel is a study of the lies that bind and the weight of familial wishes. She seems far less interested in the shock of revelation than in her characters' power to live through personal disaster. As Dennis's daughter pieces together Billy's real history, she also learns of the accommodations her own family had long made--and discovers that good intentions can be as destructive as the truth they mean to hide.

"There's no one like Alice McDermott for catching the ebullient particulars of the Irish-American sensibility, and in this superbly drawn, bittersweet tale of a captivating alcoholic, Charming Billy, her touch is light as a feather, her perceptions purely accurate."
--Elle

"An astoundingly beautiful novel about the persistence of love, the perseverance of grief, and all-but-unbearable loneliness, as well as faith, loyalty and redemption."
--The Philadelphia Inquirer

"Magical...In Charming Billy, Ms. McDermott writes...with wisdom and grace, refusing to sentimentalize her characters even as she forces us to recognize their decency and goodness. She has written a luminous and affecting novel."
--Michiko Kakutani, The New York Times