Items related to Blackballed: The Black and White Politics of Race on...

Ross, Lawrence Blackballed: The Black and White Politics of Race on America's Campuses

Blackballed: The Black and White Politics of Race on America's Campuses 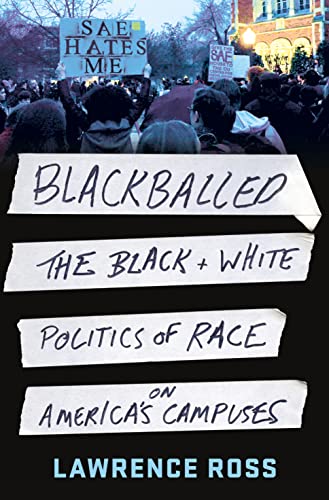 "College" is a word that means many things to many people: a space for knowledge, a place to gain lifelong friends, and an opportunity to transcend one's socioeconomic station. Today, though, this word also recalls a slew of headlines that have revealed a dark and persistent world of racial politics on campus. Does this association disturb our idealized visions of what happens behind the ivied walls of higher learning? It should-because campus racism on college campuses is as American as college football on Fall Saturdays.

From Lawrence Ross, author of The Divine Nine and the leading expert on sororities and fraternities, Blackballed is an explosive and controversial book that rips the veil off America's hidden secret: America's colleges have fostered a racist environment that makes them a hostile space for African American students. Blackballed exposes the white fraternity and sorority system, with traditions of racist parties, songs, and assaults on black students; and the universities themselves, who name campus buildings after racist men and women. It also takes a deep dive into anti-affirmative action policies, and how they effectively segregate predominately white universities, providing ample room for white privilege. A bold mix of history and the current climate, Blackballed is a call to action for universities to make radical changes to their policies and standards to foster a better legacy for all students.

LAWRENCE ROSS is a bestselling author, lecturer, writer, filmmaker, social media and consumer trends expert. His groundbreaking book, The Divine Nine: The History of African American Fraternities and Sororities, has become the preeminent book on African-American fraternities and sororities. He's written regular pieces for CNN.com, The Grio, The Root, Ebony.com, and USA Today. He lives in Westchester, CA.

"The tendency for campus leaders, as well as the perpetrators, to minimize and trivialize issues of race on college campuses is what author Lawrence Ross tackles in his new book, Blackballed...Ross reminds us that highly visible examples of campus racism in the 21st century are not difficult to come by." ―HuffPost College

"Racism, Ross argues, has been a fact of life for black students on predominantly white campuses for nearly 200 years...Ross...calls for efforts to make campuses more welcoming to black students, increases in the numbers of black students and faculty members, reform of the Greek system, and far more diversity training for all members of the campus community." ―The Washington Post

"Blackballed...examines what colleges and universities are often not ready for: reality. The reality that across the nation, multitudes of African-American, Latino and Asian-American students feel marginalized on their campuses." ―The Root

"Insightful ... Ross should be read along with Michelle Alexander, Ta-Nehisi Coates, and Claudia Rankine." ―Booklist

"The special value of Ross’s book is that it documents incidents in recent history and the experiences of the students involved to show the severity of racism on college campuses and its persistence...he questions whether 'going to a predominantly white institution is really worth it for African-Americans.'" ―Publishers Weekly

"Americans always say that the best way to end racism and bigotry is through education. But Blackballed makes it clear that our nation's institutions of higher learning are places where that doesn't just happen; its where bigotry is practiced, reinforced and make more palatable in the 21st century. Jim Crow may have been embodied by a cigar chompin' white racist sheriff in the South, but Lawrence Ross makes plain that his children and grandchildren have a command of the English language and carry the title of professor." ―Roland Martin, journalist

"Blackballed is a powerful and timely work. A must read for those on colleges campuses and off. Unflinching, thorough, and thoughtful, Ross has engineered a hard-hitting book that shatters the myth of the 'isolated incident'. Blackballed is a game changer." -- MK Asante, Professor at Morgan State University and bestselling author of Buck

"That cold, old man, Racism, is still seeking warmth on our college campus. Lawrence Ross has pulled that blanket away leaving Racism without cover: no welcome, no understanding, no warmth. College should be a time of enlightenment: inquiry, curiosity, questioning. We have discovered salt water on Mars indicating the possibility of life on our sister planet. Maybe we can eliminate hate yielding the possibility of life on Earth." --Nikki Giovanni, Poet

“Blackballed makes a sorely needed contribution to the literature on race and higher education. This carefully researched and beautifully written text serves as a sobering reminder that "Post-Racial America" remains a myth, even in the hallowed halls of post-secondary schooling. With deep analysis and urgent examples, Ross shows how anti-Black racism pervades our nations campuses from the classroom to fraternity row. This book cements Lawrence Ross's reputation as one of the nation's most lucid, insightful,and courageous writers on race, culture, and education.” ―Marc Lamont Hill, Distinguished Professor of Africana Studies, Morehouse College

"Parents and high school counselors of black kids must read this book. They will learn that the grass is not always greener at predominantly white universities, and in fact, the grass is often infested with racism. For decades, predominantly white colleges have been seen as better options for black students than HBCUs. Blackballed reveals the price many black students are paying for this choice." --Walter Kimbrough, President, Dillard University

"Amid the volatility of race in America the nation’s college campuses have often been uniquely troubled. Lawrence Ross has written a crucial exploration of racism in higher education and its implications for the society at large. Were there a syllabus for understanding race in America Blackballed required reading." -Dr. William Jelani Cobb, Director, Africana Studies Institute

1. Blackballed: The Black and White Politics of Race on America's Campuses