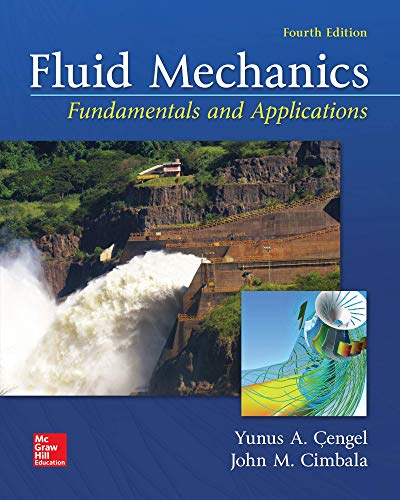 Cengel and Cimbala's Fluid Mechanics Fundamentals and Applications, communicates directly with tomorrow's engineers in a simple yet precise manner, while covering the basic principles and equations of fluid mechanics in the context of numerous and diverse real-world engineering examples. The text helps students develop an intuitive understanding of fluid mechanics by emphasizing the physics, using figures, numerous photographs and visual aids to reinforce the physics. The highly visual approach enhances the learning of fluid mechanics by students. This text distinguishes itself from others by the way the material is presented - in a progressive order from simple to more difficult, building each chapter upon foundations laid down in previous chapters. In this way, even the traditionally challenging aspects of fluid mechanics can be learned effectively.

McGraw-Hill's Connect, is also available as an optional, add on item. Connect is the only integrated learning system that empowers students by continuously adapting to deliver precisely what they need, when they need it, how they need it, so that class time is more effective. Connect allows the professor to assign homework, quizzes, and tests easily and automatically grades and records the scores of the student's work. Problems are randomized to prevent sharing of answers an may also have a "multi-step solution" which helps move the students' learning along if they experience difficulty.

John M. Cimbala is Professor of Mechanical Engineering at The Pennsyl¬vania State University (Penn State), University Park, PA. He received his B.S. in Aerospace Engi-neering from Penn State and his M.S. in Aeronautics from the California Institute of Technology (CalTech). He received his Ph.D. in Aeronautics from CalTech in 1984. His research areas include experimental and computational fluid mechan¬ics and heat transfer, turbulence, turbulence modeling, turbomachinery, indoor air quality, and air pollution control. Professor Cimbala completed sabbatical leaves at NASA Langley Research Center (1993–94), where he advanced his knowledge of computational fluid dynamics (CFD), and at Weir American Hydro (2010–11), where he performed CFD analyses to assist in the design of hydroturbines.
Dr. Cimbala is the author or coauthor of dozens of journal and conference papers and is the coauthor of four other textbooks: Indoor Air Quality Engi¬neering: Environmental Health and Control of Indoor Pollutants (2003), pub¬lished by Marcel-Dekker, Inc.; Essentials of Fluid Mechanics (2008); Fundamentals of Thermal-Fluid Sciences(5th ed., 2017), and Fluid Mechanics: Fundamentals and Applications (4th ed., 2018), all published by McGraw-Hill Education. He has also contributed to parts of other books, and is the author or coauthor of dozens of journal and conference papers. He has also recently ventured into writing novels. More information can be found at www.mne.psu.edu/cimbala.
Professor Cimbala is the recipient of several outstanding teaching awards and views his book writing as an extension of his love of teaching. He is a member and Fellow of the American Society of Mechanical Engineers (ASME).  He is also a member of the American Society for Engineering Education (ASEE), and the American Physical Society (APS).

Book Description McGraw-Hill Education, 2017. Condition: New. Brand new book. This is an international edition textbook with identical content as the US version and is usually paperback bound instead of hardcover. We ship all our orders from CA/IL, USA (depending on your address) and NOT from Asia! Buy with confidence from a 5-star US based seller. Choose expedited shipping for superfast delivery with tracking. Seller Inventory # 88|9781259696534

Book Description McGraw-Hill Education, 2017. Softcover. Condition: New. ***International Edition***Soft cover/Paperback*** Textbook printed in English. ***Brand New***. Most international edition has different ISBN and Cover design. Some book may show sales disclaimer such as "Not for Sale or Restricted in US" on the cover page but it is absolutely legal to use. Please provides valid phone number with your order for easy delivery. Seller Inventory # C9781259696534

Book Description McGraw-Hill Education, 2017. Soft cover. Condition: New. 4th Edition. Brand New International Edition textbook. Some book may show sales disclaimer such as "Not for Sale or Restricted in US" on the cover page but it is absolutely legal to use in US or Canada. Ship from Multiple Locations, including Asia , Hong Kong ,Taiwan , US or Canada depend on stock location. Seller Inventory # 000123

Book Description McGraw-Hill Education, 2017. soft cover. Condition: New. International Edition. No supplemental materials. International Editions may have a different cover or ISBN but generally have the exact same content as the US edition, just at a more affordable price. In some cases, end of chapter questions may vary slightly from the US edition. International Editions are typically printed in grayscale, and likely will not have any color throughout the book. New. Books ship from multiple locations depending on availability. All orders are shipped with tracking information. We take pride in our customer service. Please contact us if you have any questions regarding this listing. Seller Inventory # 16867