Items related to Foundations in Microbiology 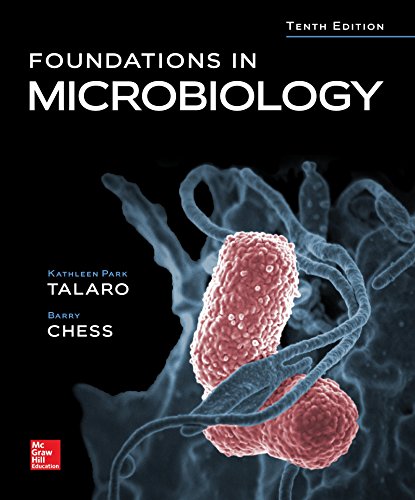 Foundations in Microbiology is an allied health microbiology text with a taxonomic approach to the disease chapters. It offers an engaging and accessible writing style through the use of case studies and analogies to thoroughly explain difficult microbiology concepts.

We were so excited to offer a robust learning program with student-focused learning activities, allowing the students to manage their learning while you easily manage their assessment. Revised art and updated photos help concepts stand out. Detailed reports show how your assignments measure various learning objectives from the book (or input your own!), levels of Bloom's Taxonomy or other categories, and how your students are doing. The Talaro Learning Users who purchase Connect receive access to a full online eBook version of the textbook, including SmartBook! New to SmartBook with this edition are learning resources to aid student understanding of content utilizing a variety of learning tools.

Barry Chess has taught microbiology at Pasadena City College for more than twenty years. Prior to that, while studying at the California State University and the University of California, he conducted research into the expression of genes involved in the development of muscle and bone.

At PCC, beyond his usual presence in the microbiology laboratory and lecture hall, Barry has taught majors and non-majors biology, developed a course in human genetics, helped to found a biotechnology program on campus, and regularly supervises students completing independent research projects in the life sciences.Over the past several years, his interests have focused on innovative methods of teaching that lead to greater student success. He has written and reviewed cases for the National Center for Case Study Teaching in Science and contributed to the book Science Stories You Can Count On: 51 Case Studies with Quantitative Reasoning in Biology. Barry has presented papers and talks on the effective use of case studies in the classroom, the use of digital tools to enhance learning, and for several years served as a scientific advisor for the American Film Institute. In addition to Laboratory Applications in Microbiology, Barry is coauthor of the lecture text Foundations in Microbiology, now in its tenth edition. He is a member of the American Association for the Advancement of Science, and the American Society for Microbiology, and the Skeptics Society. Barry was profiled in the book, What Scientists Actually Do, where he was illustrated as a young girl with pigtails, about to stick a fork into an electrical outlet.
Kathleen Park Talaro is a microbiologist, educator, author, and artist. She has been nurturing her love of microbiology since her youth growing up on an Idaho farm where she was first fascinated by tiny creatures she could just barely see swimming in a pond. This interest in the microbial world led to a biology major at Idaho State University, where she worked as a teaching assistant and scientific illustrator for one of her professors. This was the beginning of an avocation that she continues today―that of lending her artistic hand to interpretation of scientific concepts. She continued her education at Arizona State University, Occidental College, California Institute of Technology, and California State University. She has taught microbiology and major’s biology courses at Pasadena City College for 30 years, during which time she developed new curricula and refined laboratory experiments. She has been an author of, and contributor to, several publications of the William C. Brown Company and McGraw-Hill Publishers since the early 1980s, first illustrating and writing for laboratory manuals and later developing this textbook. She has also served as a coauthor with Kelly Cowan on the first two editions of Microbiology: A Systems Approach. Kathy continues to make microbiology a major focus of her life and is passionate about conveying the significance and practical knowledge of the subject to students, colleagues, family, friends, and practically anyone who shows interest. In addition to her writing and illustration, she keeps current attending conferences and participating in the American Society for Microbiology and its undergraduate educational programs. She is gratified by the many supportive notes and letters she has received over the years from devotees of microbiology and users of her book. She lives in Altadena, California, with husband Dave Bedrosian, and son David. Whenever she can, she visits her family in Idaho. In her spare time, she enjoys photography, reading true crime books, music, crossword puzzles, and playing with her rescued kitties.

Book Description McGraw-Hill Education, 2017. soft cover. Condition: New. International Edition. No supplemental materials. International Editions may have a different cover or ISBN but generally have the exact same content as the US edition, just at a more affordable price. In some cases, end of chapter questions may vary slightly from the US edition. International Editions are typically printed in grayscale, and likely will not have any color throughout the book. New. Books ship from multiple locations depending on availability. All orders are shipped with tracking information. We take pride in our customer service. Please contact us if you have any questions regarding this listing. Seller Inventory # 16873

Shipping: US$ 21.14
From United Kingdom to U.S.A.
Destination, rates & speeds