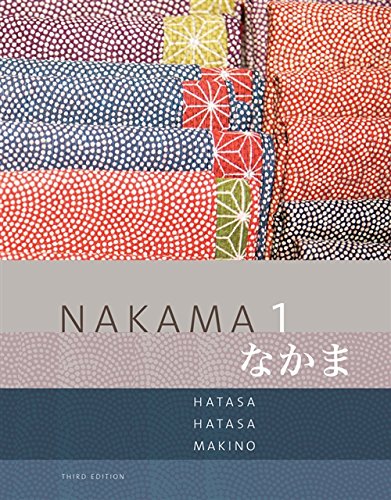 NAKAMA 1 is a complete, flexible introductory program designed to present the fundamentals of the Japanese language to users. The NAKAMA 1 program focuses on proficiency-based language learning, emphasizes practical communication and student interaction, and fosters the development of all four language skills and cultural awareness. Thematically organized chapters focus on high-frequency communicative situations and introduce students to the Japanese language and its three writing systems: hiragana, katakana, and kanji. Maintaining the program's balanced approach, the new edition features updated technology resources, updated culture, and contemporary vocabulary to enhance both teaching and learning.

Yukiko Abe Hatasa received her Ph.D. in linguistics in 1992 from the University of Illinois at Urbana-Champaign. She has taught all levels of Japanese for over twenty-five years, and has worked on curriculum development and teacher training in five major institutions in the US, Australia, and Japan. She is known nationwide as one of the premier Japanese methodologists in the US and Japan. She is currently a professor of Japanese pedagogy at Hiroshima University.

Kazumi Hatasa received his Ph.D. in education in 1989 from the University of Illinois at Urbana-Champaign. He is currently a professor at Purdue University and Director of the Japanese School at Middlebury College. He is recognized internationally for his work in software development for the Japanese language and distributes most of his work as freeware over the Internet.

Seiichi Makino received his Ph.D. in linguistics in 1968 from the University of Illinois at Urbana-Champaign. He is an internationally prominent Japanese linguist and scholar who is recognized throughout the world for his scholarship and for his many publications. Before beginning his tenure at Princeton University in 1991, he taught Japanese language, linguistics, and culture at the University of Illinois while training lower division language coordinators. He is an experienced ACTFL oral proficiency trainer in Japanese and frequently trains Japanese instructors internationally in proficiency-oriented instruction and in the administration of the Oral Proficiency Interview. Professor Makino has been the Academic Director of the Japanese Pedagogy M.A. Summer Program at Columbia University since 1996. He also directs the Princeton-in-Ishikawa Summer Program. In 2014, the Japanese government honored Dr. Seiichi Makino with a decoration: The Order of the Sacred Treasure, Gold Rays with Neck Ribbon, for his outstanding contributions in the mutual academic exchanges between Japan and the United States and the development of Japanese language education.

"One of the most well-written Japanese textbooks published in the U.S."

"A well-designed, challenging program that can clearly prepare students for the JLPT and other national exams, Study Abroad in Japan, and eventually gaining employment in Japan or with Japanese companies."

"NAKAMA is surely a complete program. It is very user-friendly and informative. I like [that] it teaches some communicative strategies. It offers more than what I expected [from] a Japanese textbook."

"[I] like the technical support that will enhance students' interactive communicative ability, which is not easily attainable outside [the] classroom."

"... the exercises and activities that follow each new grammar point are instrumental in reinforcing what I teach. Most of the activities are fun and creative, and can be adapted to our class needs. This is the strongest aspect of the text and the reason we use it in our university."