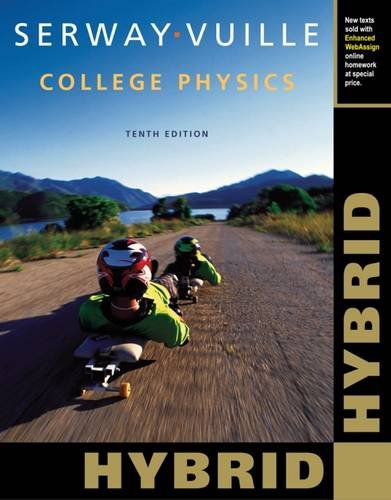 While physics can seem challenging, its true quality is the sheer simplicity of fundamental physical theories--theories and concepts that can enrich your view of the world around you. COLLEGE PHYSICS, Tenth Edition, provides a clear strategy for connecting those theories to a consistent problem-solving approach, carefully reinforcing this methodology throughout the text and connecting it to real-world examples. For students planning to take the MCAT exam, the text includes exclusive test prep and review tools to help you prepare. This Hybrid version features the same content and coverage as the full text combined with our integrated digital homework solution, WebAssign, giving a more interactive learning experience, plus the convenience of a text that is both brief and affordable.

Raymond A. Serway is Professor Emeritus at James Madison University. He earned his doctorate at Illinois Institute of Technology. Among his accolades, he received an honorary doctorate degree from his alma mater, Utica College, the 1990 Madison Scholar Award at James Madison University (where he taught for 17 years), the 1977 Distinguished Teaching Award at Clarkson University and the 1985 Alumni Achievement Award from Utica College. As a Guest Scientist at the IBM Research Laboratory in Zurich, Switzerland, Dr. Serway worked with K. Alex Müller, who shared the 1987 Nobel Prize in Physics. He also was a visiting scientist at Argonne National Laboratory, where he collaborated with his mentor and friend, the late Sam Marshall. In addition to this text, Dr. Serway is the co-author of COLLEGE PHYSICS, Eleventh Edition; PRINCIPLES OF PHYSICS, Fifth Edition; ESSENTIALS OF COLLEGE PHYSICS; MODERN PHYSICS, Third Edition; and the high school textbook PHYSICS, published by Holt McDougal. He has published more than 40 research papers in the field of condensed matter physics and has given more than 60 presentations at professional meetings.

Chris Vuille (PhD, University of Florida) is associate professor of physics at Embry-Riddle Aeronautical University, the world's premier institution for aviation higher education. While he has taught courses at all levels, including postgraduate, his primary interest is the teaching of introductory physics courses. He conducts research in general relativity, astrophysics, cosmology, and quantum theory and was a participant in a special three-year NASA grant program where he studied properties of neutron stars. His work has appeared in many scientific journals and in ANALOG SCIENCE FICTION/SCIENCE FACT magazine. He is the coauthor of COLLEGE PHYSICS, Eleventh Edition and ESSENTIALS OF COLLEGE PHYSICS.