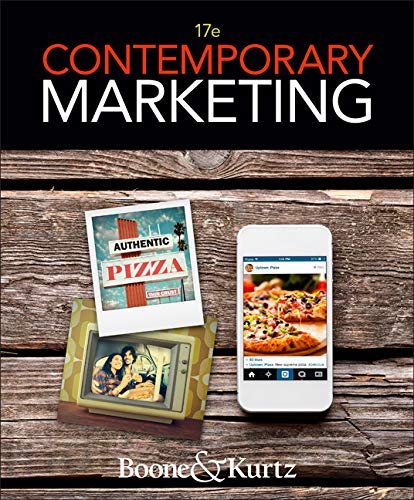 CONTEMPORARY MARKETING, Seventeenth Edition, is the proven, premier teaching and learning resource for foundational marketing courses. The authors provide thorough coverage of essential marketing principles, exploring all components of the marketing mix, and providing practical guidance to help students prepare for successful marketing careers. This trusted text continues to grow stronger with each groundbreaking new edition, preserving what has made previous editions perennial best-sellers, while adding innovative new features and up-to-date information on current trends, topics, research, and best practices in this ever-evolving field. Because it is so technologically advanced, student-friendly, instructor-supported, and more relevant than ever, CONTEMPORARY MARKETING, Seventeenth Edition, remains in a class by itself.

After a long and distinguished career, Louis E. "Gene" Boone passed away just before the publication of the 13th edition of CONTEMPORARY MARKETING. Over the years, students and colleagues at the University of Tulsa and the University of South Alabama and other schools in the U.S., Australia, and Europe were fortunate to be influenced by Gene's insights. Many marketing instructors knew Gene through his distinguished career and remember the numerous contributions that he made to business education. Gene was a pioneer of the marketing discipline and arguably the best and most creative business writer of his generation.