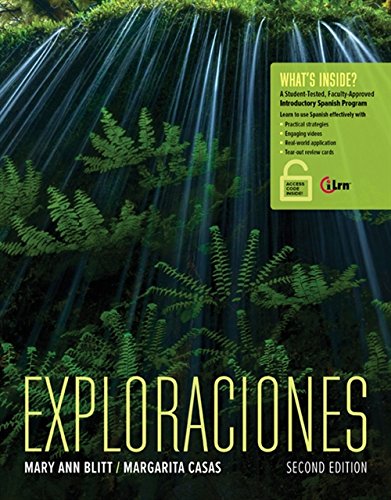 Created through a "student-tested, faculty-approved" review process with thousands of students and hundreds of faculty, EXPLORACIONES is an engaging and accessible solution to accommodate the diverse lifestyles of today's learners.

Mary Ann Blitt began her Spanish studies at the age of 13 while living in Madrid, Spain. She received her B.A. in Spanish from the University of Colorado at Colorado Springs, and after spending a year studying at the Universidad de Granada, she returned to the university to obtain a teaching certificate. She later attended Colorado State University, where she received her master's degree in Spanish with interdisciplinary studies in French. After teaching Spanish and coordinating the study abroad program at Metropolitan Community College-Maple Woods in Kansas City for fourteen years, she joined the faculty at College of Charleston in 2014. Mary Ann has studied in Spain, Mexico, France, and Canada and has trained teachers of English as a Foreign Language in Asuncion, Paraguay. She is currently actively involved in professional development workshops.

Margarita Casas was born in Mexico City, Mexico. She completed her bachelor's degree in sciences and techniques of communication in Guadalajara, Mexico. She holds two master's degrees from Colorado State University, one in Spanish literature with an emphasis on education, and the other in Teaching English as a Second Language. Currently, she is faculty and Chair of the Foreign Language Department at Linn-Benton Community College. She has collaborated on two textbooks prior to EXPLORACIONES and has published a novel, Italia en cuatro estaciones, winner of the first literature contest of the Universidad de Guadalajara. She is an avid traveler who hopes to inspire her students to travel and see the world by themselves.

"Teaching Exploraciones without iLrn would be like using an old flip cell phone when you could be using a smart phone. It just makes more sense in the world we livein to give students access to a great piece of technology that helps their learning."

"[The instructors'] enthusiasm for particular elements in the book and in iLrn --and the knowledge that they can teach the way they want -- improves the teaching experience, the class environment, and the learning experience."