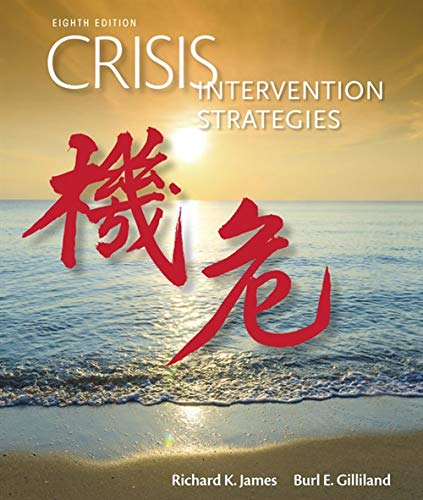 This authoritative, best-selling text presents the latest skills and techniques for handling crisis situations. The authors' task model clearly illustrates and elucidates the process of dealing with people in crisis, from defining the problem to obtaining commitment. Using this model, the authors build specific strategies for handling a myriad of different crisis situations, accompanied in many cases with the dialogue that a practitioner might use when working with the individual in crisis. This book puts you on the front lines with the crisis worker throughout the chapters, and then illuminates the techniques and strategies the worker used. New videos in MindTap (available with the text) correlate with the text and demonstrate crisis intervention techniques, ensuring that you not only understand the theoretical underpinnings of crisis intervention theories, but also know how to apply them in crisis situations.

Burl Gilliland was a twice Distinguished Professor Emeritus who taught in the Department of Counseling, Educational Psychology, and Research at the University of Memphis. He was instrumental in founding the Ph.D. Program in Counseling Psychology in Memphis and served as the program director for more than a dozen years. He was recipient of the Martin Luther King, Jr. Human Rights Award for his work in race relations and human relations. He was a licensed psychologist, licensed professional counselor, and licensed school counselor. He was also a retired Captain in the U. S. Naval Reserve, having seen service in World War II and combat duty in the Korean War. He served in extensive consultative capacities with a variety of agencies, police departments, and medical and educational institutions, including service for 18 years as school psychologist for the Milan, Tennessee School District. He was active in both APA and ACA.