Items related to Listening to Western Music (with Download, 1 term (6... 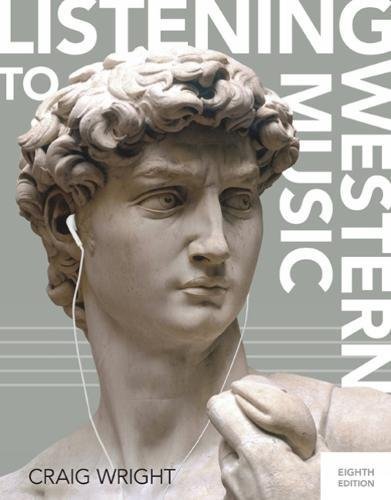 LISTENING TO WESTERN MUSIC equips you with the tools to actively listen to and inspire a lifelong appreciation for music. Known for his clear, conversational style, Professor Wright helps you immediately find connections to music by comparing pop and classical music concepts. His text is organized chronologically and discusses musical examples from each era in its social context -- describing the construction and culture of each piece. LISTENING TO WESTERN MUSIC is fully integrated with MindTap to better help you develop your listening skills and maximize your course success. Online resources include interactive exercises, streaming music, Active Listening Guides, chapter and critical thinking quizzes, iAudio lectures, YouTube videos, Beat the Clock games, and more. You also can download all music directly to a music library.

Craig M. Wright received his Bachelor of Music degree at the Eastman School of Music in 1966 and his Ph.D. in musicology from Harvard University in 1972. He began his teaching career at the University of Kentucky and for the past forty years has been teaching at Yale University, where he is currently the Henry L. and Lucy G. Moses Professor of Music. At Yale, Wright's courses include his perennially popular introductory course, Listening to Music (also part of the offerings of Open Yale Courses); his large lecture course Exploring the Nature of Genius; and most recently his Coursera course Introduction to Classical Music. He is the author of numerous scholarly books and articles on composers ranging from Leoninus to Bach. Wright has also been the recipient of many awards, including a Guggenheim Fellowship, the Einstein and Kinkeldey Awards of the American Musicological Society, and the Dent Medal of the International Musicological Society. In 2004, he was awarded the honorary degree Doctor of Humane Letters from the University of Chicago. And in 2010 he was elected a member of the American Academy of Arts and Sciences, joining fellow inductee, banjo player Steve Martin. In addition to LISTENING TO MUSIC and LISTENING TO WESTERN MUSIC, EIGHTH EDITION, Wright has also published THE ESSENTIAL LISTENING TO MUSIC, SECOND EDITION; LISTENING TO MUSIC, CHINESE EDITION (Schirmer Cengage Learning/Three Union Press, 2012), translated and simplified by Profs. Li Xiujung (China Conservatory, Beijing) and Yu Zhigang (Central Conservatory, Beijing), both of whom worked with Wright at Yale; and MUSIC IN WESTERN CIVILIZATION, MEDIA UPDATE (Schirmer Cengage Learning, 2010), with coauthor Bryan Simms. He is currently at work on a volume titled MOZART'S BRAIN: EXPLORING THE NATURE OF GENIUS.

Its strengths are its 1) readability for a general audience 2) wonderful online resources ... 3) conciseness in terms of the material it presents 4) its provision of an eBook as well as a hard copy version of the text, and, 5) use of music samples by current artists who may be more familiar to students.

The writing is very clear and an "enjoyable read". He gives pertinent information and keeps the reader engaged without boredom or using a "dumbing down" approach. It is written in such a way as to keep the reader personally engaged and spurred to actively listen to music, and not just as a list of musical history. I especially like the references to popular culture and feel they help the reader make relevant connections from historical and factual information to recent and current trends in music. The Checklists of Musical Style are also particularly useful and help students to summarize the information presented for each era. The "What to Listen For" pointers are good and direct the readers/listeners to the main aspects to be discovered in each piece. This is an excellent, thorough text for today's college student and should increase student interest and understanding of the topics presented. It will spur students to explore music outside of the classroom and teach them to actively listen to music.

Great survey with terrific supporting materials, including maps, graphs in different colors, good timelines. Good selection of materials: representative and thorough. Textual language is college level but clear. First chapter especially well done. Great references to pop culture. Introduction to modern issues about music is very thoughtfully presented. Where are we going? Loved the musical styles checklist. The modern student could feel at home with the many selections of "how to listen" to the materials. This is a great book for a college population who actually read the text. It covers each period in around 80 pages, but it is approachable for the student of today who wants materials in many formats. Great supporting materials like maps, graphs and art works.