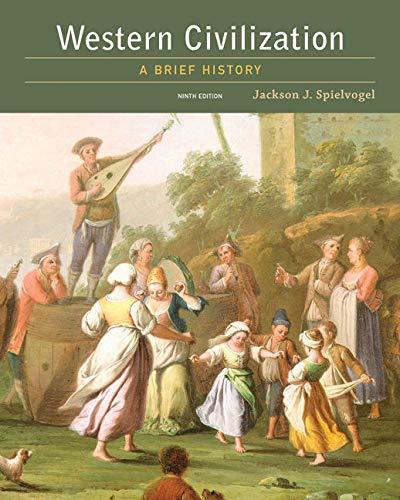 Put the world today into context by learning about the past with this brief, best-selling Western Civilization text, which has helped thousands of students succeed in the course. Jackson Spielvogel's engaging style of writing weaves the political, economic, social, religious, intellectual, cultural, and military aspects of history into a gripping story that is as memorable as it is instructive. Learning and study tools include maps, illustrated chapter summaries, timelines, study questions, and key terms. Also available is MindTap for WESTERN CIVILIZATION: A BRIEF HISTORY, 9th EDITION, an online digital learning experience that combines readings and interactive activities into a learning path that guides you through the course. The textbook is available in the following split options: WESTERN CIVILIZATION: A BRIEF HISTORY, 9th EDITION COMPLETE, VOLUME I: TO 1715, and VOLUME II: SINCE 1500.

Jackson J. Spielvogel is Associate Professor Emeritus of History at The Pennsylvania State University. He received his Ph.D. from The Ohio State University, where he specialized in Reformation History under Harold J. Grimm. His articles and reviews have appeared in journals such as MOREANA, JOURNAL OF GENERAL EDUCATION, CATHOLIC HISTORICAL REVIEW, ARCHIV FÜR REFORMATIONSGESCHICHTE and AMERICAN HISTORICAL REVIEW. He also has contributed chapters or articles to THE SOCIAL HISTORY OF REFORMATION, THE HOLY ROMAN EMPIRE: A DICTIONARY HANDBOOK, the SIMON WIESENTHAL CENTER ANNUAL OF HOLOCAUST STUDIES and UTOPIAN STUDIES. His work has been supported by fellowships from the Fulbright Foundation and the Foundation for Reformation Research. At Penn State, he helped inaugurate the Western Civilization course, as well as a popular course on Nazi Germany. His book HITLER AND NAZI GERMANY was first published in 1987 (7th Edition, 2014). In addition, he is the author of WESTERN CIVILIZATION, first published in 1991 (10th Edition, 2018), and co-author (with William Duiker) of WORLD HISTORY, first published in 1994 (9th Edition, 2019). Professor Spielvogel has won five major university-wide teaching awards. During the 1988-1989 year, he held the Penn State Teaching Fellowship, the university's most prestigious teaching award. He won the Dean Arthur Ray Warnock Award for Outstanding Faculty member in 1996 and received the Schreyer Honors College Excellence in Teaching Award in 2000.