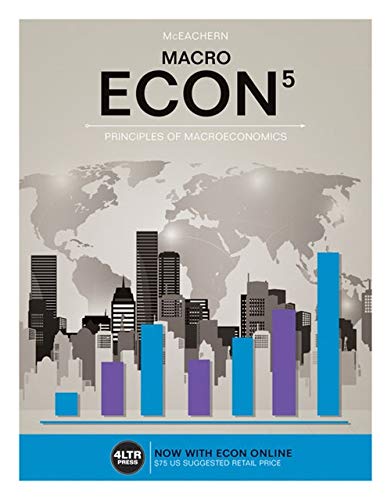 Learn Economics YOUR Way with ECON Macro! ECON Macro's easy-reference, paperback textbook presents course content through visually-engaging chapters as well as Chapter Review Cards that consolidate the best review material into a ready-made study tool. With the textbook or on its own, ECON Macro Online allows easy exploration of ECON Macro anywhere, anytime - including on your device! Collect your notes and create StudyBits™ from interactive content as you go to remember what's important. Then, either use preset study resources, or personalize the product through easy-to-use tags and filters to prioritize your study time. Make and review flashcards, review related content, and track your progress with Concept Tracker, all in one place and at an affordable price! ECON Macro draws on what you already have observed through your life experiences to help explain economic concepts, choices, institutions, and event and help you gain a strong understanding of economic principles.

Dr. William A. McEachern began teaching large sections of economic principles shortly after joining the University of Connecticut. Several years later he began offering teaching workshops around the country. The University of Connecticut Alumni Association conferred on him its Faculty Excellence in Teaching Award in 2000. He earlier won the Association's award for Distinguished Public Service. Dr. McEachern has published books and monographs on public finance, public policy, and industrial organization, including MANAGERIAL CONTROL AND PERFORMANCE (D.C. Heath and Company). His research has also appeared in edited volumes, such as READINGS IN PUBLIC CHOICE ECONOMICS (University of Michigan Press), INTERNATIONAL HANDBOOK ON TEACHING AND LEARNING ECONOMICS (Edward Elgar Publishing), and RETHINKING ECONOMIC PRINCIPLES (Irwin Publishing), He has also published in a variety of refereed journals, including Economic Inquiry, National Tax Journal, Quarterly Review of Economic and Business, Journal of Industrial Economics, Kyklos, Econ Journal Watch, and Public Choice. His principles of economics textbooks have been translated into Spanish, Chinese, and Bahasa Indonesia, and have been adapted for Australia and for India. He is the founding editor of THE TEACHING ECONOMIST, a newsletter that for a quarter of a century has focused on teaching economics at the college level. Dr. McEachern has advised federal, state, and local governments on policy matters and has been quoted in media such as the New York Times, Times of London, Wall Street Journal USA Today and Reader's Digest. He, earned an undergraduate degree with honors from College of the Holy Cross, served three years as a U.S. Army officer, and earned an M.A. and Ph.D. in economics from the University of Virginia.

"I used all aspects of the 4LTR Press solutions. I found them very helpful study tools."

"The online help was great. The games made it so it wasn't boring and I retained more of the information."

"I like the online quizzes. They are very helpful. So are the chapter review cards. I use them before each exam."

"The examples are real world and easy for students to relate to."

"The text is concisely written with lots of examples and photographs connected to the examples."

Book Description Paperback. Condition: New. $$$***READ THIS PLS.*** $$$ Teacher's Edition (same contents as the student edition plus extra material). Marked Not for Resale with disclaimer. Need it urgently? Upgrade to Expedited. In stock and we ship daily on weekdays & Saturdays. Seller Inventory # i7bicr