Items related to Scientific American Nutrition for a Changing World... 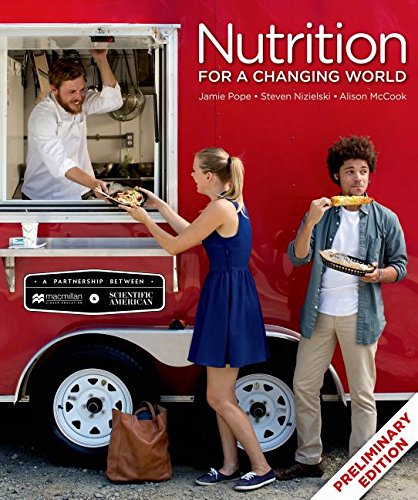 NOTE: This is a standalone book and will not include an access code.

Nutrition for Changing World is also the only textbook for the course to offer automatically graded dietary analysis activities using the USDA’s open-access SuperTracker. These exercises are in LaunchPad, a dedicated online course space that compliments the text to provide students with a fully integrated print/digital learning experience.

For those courses that explore the micronutrients by function in the body, the first edition includes a 10-page Infographic that arranges micronutrient coverage by nutrients involved in metabolism, antioxidant function, bone health, and blood health. This rich appendix (Appendix A3) includes embedded questions for student reflection and cross-references to the vitamins and minerals chapters. The Appendix is also available in PowerPoint for instructor use.

JAMIE POPE, M.S., R.D., has been with Vanderbilt University since 1986, working in the areas of obesity research, weight management, health promotion, heart disease prevention. Since 2000, she has been Instructor of Nutrition in the School of Nursing. In addition to her current work on Nutrition for a Changing World, Jamie co-authored several best-selling books, including The T-Factor Fat Gram Counter, and is author of The Last Five Pounds: A Liberating Guide to Living Thin. She has authored or contributed to numerous other scientific and popular press publications. Jamie s popular classes bring together undergraduate students from a wide range of majors to learn about nutrition science and its application to their personal and professional lives. Jamie is a long-time member of the Academy of Nutrition and Dietetics and served as media representative for the Tennessee Dietetic Association, during which time she was named as Outstanding Dietitian of the Year for the Nashville District Dietetic Association. Jamie served for over a decade as nutrition consultant for Smart Balance, Inc. Steven Nizielski, M.S., Ph.D., earned his Bachelor of Science degree from the University of Minnesota in Wildlife Biology and assisted in research projects involving Siberian tigers and grey wolves before entering graduate school. He earned his masters and doctorate degrees at the University of Minnesota in nutrition with an emphasis in biochemistry. He is currently an associate professor in the Department of Biomedical Sciences at Grand Valley State University in Allendale, Michigan, where he teaches introductory nutrition, clinical nutrition, public health, advanced metabolism, and sports nutrition courses. His current research seeks to identify cellular adaptations in adipose tissue in response to aging and endurance training. Steve is a fellow of The Obesity Society, and a member of the American Society for Nutrition (ASN) and of the American Physiological Society (APS). He is an avid competitive cyclist, and also enjoys cross-country skiing, hiking, and camping. Alison McCookhas been a science writer and editor for more than 15 years, crafting materials for both general and professional audiences. Her work spans topics ranging from health to molecular mechanisms, and has appeared in well-known publications such as Reuters, Nature, Discover, Scientific American, Popular Science, and The Lancet.

Alison has held staff positions at Reuters and Nature and most recently, she was the Deputy Editor of The Scientist, overseeing the entire editorial team. During her tenure, the magazine won two consecutive Magazine of the Year awards, across all categories, from the American Society of Business Publication Editors. Alison resides in Philadelphia, Pennsylvania."