Items related to The Weight Of Ink

Kadish, Rachel The Weight Of Ink 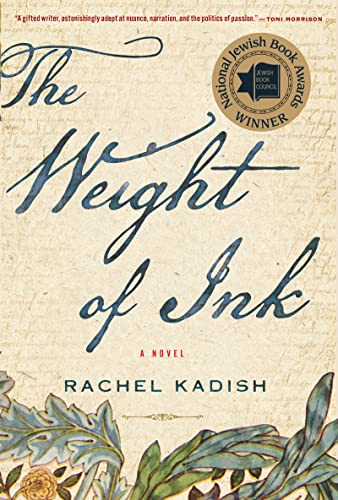 "A gifted writer, astonishingly adept at nuance, narration, and the politics of passion."—Toni Morrison

Set in London of the 1660s and of the early twenty-first century, The Weight of Ink is the interwoven tale of two women of remarkable intellect: Ester Velasquez, an emigrant from Amsterdam who is permitted to scribe for a blind rabbi, just before the plague hits the city; and Helen Watt, an ailing historian with a love of Jewish history.

When Helen is summoned by a former student to view a cache of newly discovered seventeenth-century Jewish documents, she enlists the help of Aaron Levy, an American graduate student as impatient as he is charming, and embarks on one last project: to determine the identity of the documents' scribe, the elusive "Aleph."

Electrifying and ambitious, The Weight of Ink is about women separated by centuries—and the choices and sacrifices they must make in order to reconcile the life of the heart and mind.

An Amazon Best Book of June 2017: I often have trouble staying engaged by literary novels starring characters separated by centuries. But The Weight of Ink hooked me so deeply that at no point did I want to wiggle free of this story of two historians investigating 300-year-old letters written in plague-ridden London by a young Jewish woman with a white-hot intellect and no acceptable outlet for it. British history professor Helen Watt immediately recognizes the historical value of a bundle of rabbi’s letters and books discovered behind the wall of an old house, and she recruits American graduate student Aaron Levy to help her with translations. Months from retirement, Helen hides her Parkinson’s disease, while Aaron struggles with his Shakespeare-focused thesis that’s going nowhere fast and with Helen’s curmudgeonly ways. But when Helen and Aaron realize that the rabbi’s letters were penned for him by a woman, not the typical male scribe, their historical significance skyrockets. As Helen and Aaron’s investigation accelerates, author Rachel Kadish plunges the reader into the smoggy, socially circumscribed world of Ester Velasquez in 17th-century London. A Jewish woman living in a community that doesn’t support thinking in females or speculation beyond the accepted dogma, Ester has survived much tragedy in her young life and now quietly but steadfastly refuses to be squashed further. As plague stalks London, Ester finds ways to let her intellectual passion free despite pressures to marry and be domesticated in mind and soul. Gorgeous writing that might, in isolation of the story, risk coming off as overwrought instead perfectly renders the strong emotions that run through Ester, Helen, and Aaron as they face down opponents and seize opportunities. Kadish, with storytelling genius, mirrors events and eureka moments across the centuries, binding the characters to one another. And an enormously satisfying ending wraps everything up while leaving enough rough edges to mimic the loose ends of real life. --Adrian Liang, The Amazon Book Review

RACHEL KADISH is the award-winning author of the novels From a Sealed Room and Tolstoy Lied: A Love Story, and the novella I Was Here. Her work has appeared on NPR and in the New York Times, Ploughshares, and Tin House.

The Weight of Ink Paperback

The Weight of Ink (Paperback or Softback)