Items related to A Short History of Australia (Classic Reprint) 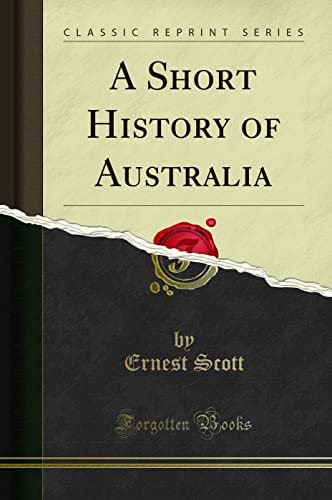 Excerpt from A Short History of Australia

This Short History of Australia begins with a blank space on the map, and ends with the record of a new name on the map, that of Anzac. It endeavours to elucidate the way in which the country was discovered, why and how it was settled, the development of civilized society within it, its political and social progress, mode of government, and relations, historical and actual, with the Empire of which it forms a part.

The aim of the author has been to make the book answer such questions as might reasonably be put to it by an intelligent reader, who will of course have regard to the limitations imposed by its size; and also to present a picture of the phases through which the country has passed. At the same time it is hoped that due importance has been given to personality. History is a record of the doings of men living in communities, not of blind, nerveless forces.

In a book written to scale, on a carefully prepared plan, it was not possible to deal more fully with some events about which various readers might desire to have more information. On some of these the author would have liked to wTite at greater length. The student who works much at any section of history finds many aspects which require more adequate treatment than they have yet received. In Australian history there are large spaces which need closer study than has yet been accorded to them.

Shipping: US$ 34.79
From United Kingdom to U.S.A.
Destination, rates & speeds