Items related to Aeroplane Construction and Operation; Including Notes... 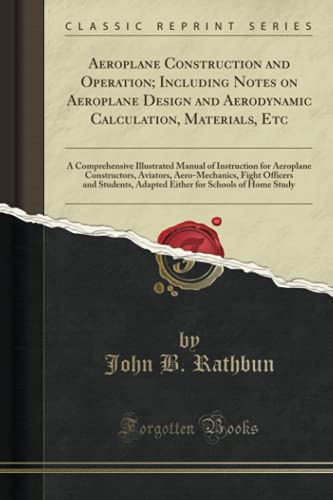 Excerpt from Aeroplane Construction and Operation; Including Notes on Aeroplane Design and Aerodynamic Calculation, Materials, Etc: A Comprehensive Illustrated Manual of Instruction for Aeroplane Constructors, Aviators, Aero-Mechanics, Fight Officers and Students, Adapted Either for Schools of Home Study

Mechanical Flight. Although the elementary principles of mechanical flight are not of recent origin, the practical development of the flying machine is confined almost entirely to the present century. Gravity propelled gliders and small models have been flown with success from a comparatively early date, but the first actual sustained flight with a power driven machine was performed by the Wright Brothers in 1903. There was no single element on this first successful machine that had not been proposed many years before by Langley, Chanute, Montgomery, Henson, Mouillard, and others, but this first flight must be attributed principally to the fact that the Wrights started carefully and painstakingly to learn how to operate (By practicing with gliders) before starting on the first power machine. If Langley had studied the operation of his machine as carefully as he did its theory and design, he would have been flying long before the Wrights as his original machine was afterwards successfully flown by Curtiss.

When once actual flight was achieved, and the success of the Wright Brothers became generally known, the development proceeded with leaps and bounds. All the resources of science and engineering skill were at once applied to the new device until our present scientific knowledge of the aeroplane compares very favorably with the older engineering sciences.

Shipping: US$ 34.79
From United Kingdom to U.S.A.
Destination, rates & speeds