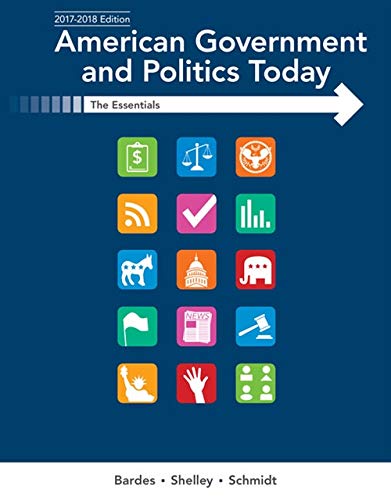 AMERICAN GOVERNMENT AND POLITICS TODAY: THE ESSENTIALS, 2017-2018 Edition, inspires you to join the exciting process of being active, informed citizens. Unbiased, concisely organized, and updated with Election 2016 coverage, the authors provide encouragement and suggestions for ways to become involved in the political process. MindTap, Cengage Learning's fully online learning solution, is available and fully integrated with this text.

Mack C. Shelley II is a professor of political science and statistics at Iowa State University. After receiving his bachelor's degree from American University in Washington, D.C., he earned a master's degree in economics and a Ph.D. in political science from the University of Wisconsin at Madison. He arrived at Iowa State in 1979. From 1993 to 2002, he served as elected co-editor of the Policy Studies Journal. Dr. Shelley has published numerous articles, books and monographs on public policy, including The Permanent Majority: The Conservative Coalition in the United States Congress; Biotechnology and the Research Enterprise: A Guide to the Literature (with William F. Woodman and Brian J. Reichel); American Public Policy: The Contemporary Agenda (with Steven G. Koven and Bert E. Swanson); and Quality Research in Literacy and Science Education: International Perspectives and Gold Standards (with Larry Yore and Brian Hand).

Steffen W. Schmidt is a professor of political science at Iowa State University. He grew up in Colombia, South America, and has studied in Colombia, Switzerland and France. He earned a B.A. from Rollins College and a Ph.D. in public law and government from Columbia University, New York. The author of 14 books and over 130 articles in scholarly journals, Dr. Schmidt is the recipient of numerous prestigious honors, including the Amoco Award for Lifetime Career Achievement in Teaching and Teacher of the Year. A member of the American Political Science Association's section on Computers and Multimedia, he is a pioneer in the use of web-based and real-time video courses. His extensive commentary on U.S. politics in national and international media earned him the nickname "Dr. Politics." A weekly blogger for Gannett, Dr. Schmidt comments on CNN en Espanol and Univision, as well as WNYC, New York. He is on Facebook (Steffen W Schmidt) and Twitter (DrPolitics).

"American Government and Politics Today: The Essentials provides students with a relevant, interactive text that attempts to take them outside of the classroom environment and into their everyday lives. Having the ability to link the past to the present, while also thinking ahead to the future, is a difficult task for authors in a subject seemingly overloaded with textbook options. However, Bardes, Shelley and Schmidt have adopted a rational approach and create a learning environment within the textbook itself to keep with the theme of having students as active, informed citizens."

"It covers the necessary material in a clear and concise manner... The tables and figures are universally useful."

"[This] book has the unique ability to be very instructor- and student-centered. Most texts are one or the other."