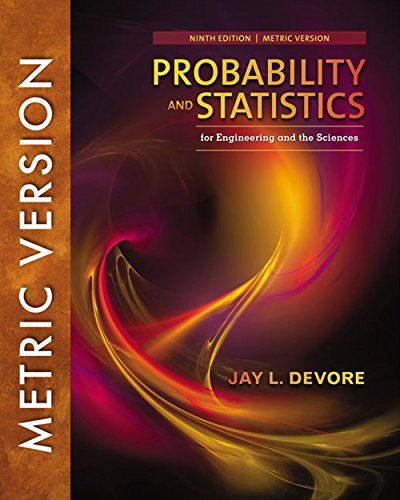 Probability and Statistics for Engineering and the Sciences

Jay Devore is Professor Emeritus of Statistics at California Polytechnic State University. He earned his undergraduate degree in Engineering Science from the University of California at Berkeley, spent a year at the University of Sheffield in England, and finished his Ph.D. in statistics at Stanford University. Jay previously taught at the University of Florida and at Oberlin College and has had visiting appointments at Stanford, Harvard, the University of Washington, New York University, and Columbia University. From 1998 to 2006, he served as Chair of the Cal Poly Statistics Department. In addition to this book, Jay has written several other widely used statistics texts for engineers and scientists and a book in applied mathematical statistics. He recently coauthored a text in probability and stochastic processes. He is the recipient of a distinguished teaching award from Cal Poly, is a Fellow of the American Statistical Association, and has served several terms as an Associate Editor of the "Journal of the American Statistical Association." In his spare time, he enjoys reading, cooking and eating good food, tennis, and travel to faraway places. He is especially proud of his wife, Carol, a retired elementary school teacher, his daughter Allison, who has held several high-level positions in nonprofit organizations in Boston and New York City, and his daughter Teresa, a high school teacher in Brooklyn.

"This text has a great number of examples and exercises that are of high quality. Students enjoy doing the real world problems. I believe this is the text's greatest strength."

"The strengths are the material coverage (i.e. topics covered) and the engineering focus. I would describe this text as a reliable classic."

1. Probability and Statistics for Engineering and the Sciences, International Metric Edition (9th Edition)

Book Description Cengage Learning, 2016. Soft cover. Condition: New. Brand New International Edition textbook. Some book may show sales disclaimer such as "Not for Sale or Restricted in US" on the cover page but it is absolutely legal to use in US or Canada. Ship from Multiple Locations, including Asia , Hong Kong ,Taiwan , US or Canada depend on stock location. Seller Inventory # 000887

2. Probability And Statistics For Engineering And The Sciences, 9E, International Metric Edition